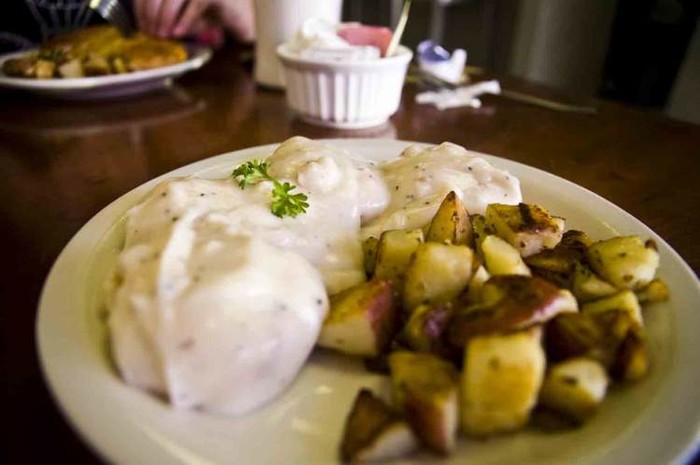 I finally dropped by Shoofly Kitchen on Boundary Street a couple weeks back and wanted to give the spot that opened early this year a little shout out in photo form with a bit of text about what they have to offer.

Go on and scroll down.

They're open Monday through Saturday and do mainly breakfast and lunch, while also offering up to go dinner items and rotating soups like Broccoli Rabe and Roasted Autumn Vegetable and various baked quiches and other assorted items.

We were there for breakfast and opted for the egg and cheese croissant and a biscuit and gravy with side of home fries (built from the a la carte menu, shown up top.) Both plates were fresh and well prepared with a notable presence of oil but not overly so.

Expect to spend about $7-$10 for a meal during breakfast or lunch -- their menus are available online and are hyperlinked.

The coffee was solid and a step above your average breakfast spot and readily refiled by our waitress, who also gave us the Wi-Fi password after asking nicely.

The space is large and offers outside tables, a half-dozen booths and a number of counter seats.