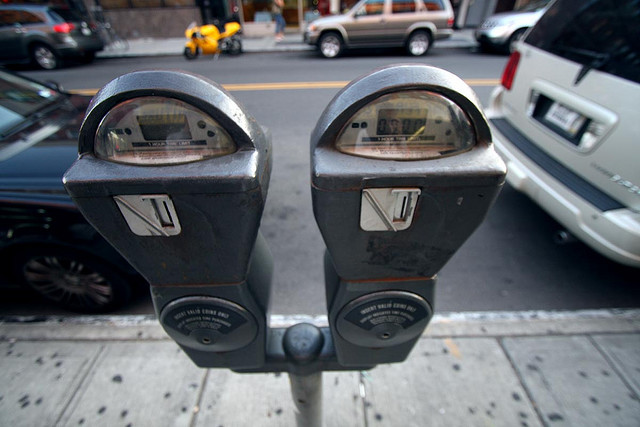 2:15 am on Friday December 10, 2010 | Posted by Ken Hawkins
Of change, parking, and big city enforcement in small town Beaufort

Flickr user Jp Gary
Like many objects of yore, there's a fondness for familiarity and the politeness which they represent.

The Island Packet has penned a worthy column about the risk the City of Beaufort takes if it once again enacts sweeping changes to the downtown parking system.

Earlier this week it was recommended that a host of tweaks be made to the hourly rates and time limits along with removing the meter kiosks from Bay Street.

In a nutshell, the Packet says a lot of the problems we have today are because the city acted to boldly in changing the status quo, and that the city risks a repeat; read their column here.

The paper also talks about the kiosks not being all bad -- for one the boxes take cards and dollar bills. But, while I don't think I'm particularly against the kiosks, I don't know if the paper's claim that they are really "less visual clutter" is very true (especially once you include all the added signage and pavement graffiti,) nor do I know the worthiness of being able to use a phone app to locate a vacant parking spot within a four-square block radius.

And that thought of how the meters feel like a "big city" solution reminded me of a discussion I was having with fellow TheDigitel writer Rob Quinn.

While there's a worthy argument to be made for these parking kiosks being a poor fit for Beaufort, I think the Packet is largely right: they're here, they're paid for, and they're not all bad.

That said the problem just isn't in the machines, it's in their handlers, too.

Most of the complaints I've fielded since the kiosks were put in had less to do with using the machines and more to do with how parking enforcement was handled.

On two occasions I've heard firsthand of parking, walking to the nearest meter and purchasing time only to return to see a car being issued a ticket faster than the owner could buy time. And when the visitor complained to the ticket writer they were met with a standoffish and curt attitude from parking enforcement.

On another occasion while parking in a non-marked space to unload restaurant supplies would have been met in the past with an officer telling the owner to move their car, now it was met with a $40 ticket and not a second look. Good for revenues, but it didn't move the car and didn't earn the city any love.

I also recall watching parking enforcement working hard during the Shrimp Festival. An excellent revenue opportunity for certain, but it'll be bad for business when festival goers stick to those time limits next year or just skip the festival to avoid the de facto $10 admission fee.

And that brings me to the second half of the enforcement problem, not only are we getting stuck with "big city" ticket enforcement -- call us a small town, or call us a polite Southern town, but acts like that just won't fly.

People visit here and live here to enjoy famed Southern hospitality and the leisureliness of knowing everyone in town. If we wanted things to be like Savannah or Atlanta, I suspect we'd all just go there.

Either bring back the hospitality or kick out the kiosks, we can loose one, but loosing both is an attack on Beaufort's personality.