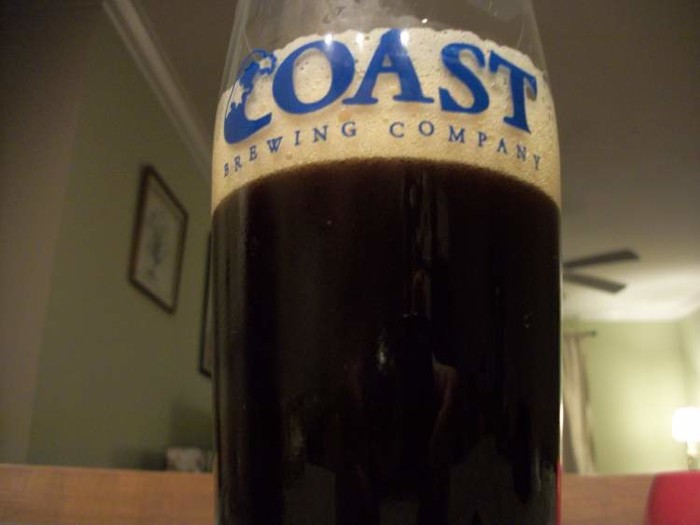 Image by Me Event Horizon in a fancy COAST imperial pint glass.

Possibly the first of its kind to be (professionally) brewed in South Carolina, Event Horizon straddles some already blurry style lines. Cascadian Dark Ale is generally regarded as an alternate name for what is now officially called India Black Ale, also known as Black IPA. These beers have all the hops of a big India Pale Ale, or more, but are also brewed with dark and/or roasted malts, imparting a sinister opaque blackness and some of the big, burnt toffee/coffee flavor notes of a black ale. The color almost makes it an optical illusion, as you don't expect a massive hop nose or taste from its appearance.

And that's where Event Horizon differs. This beer is not black, nor does it have big, burnt flavor notes, hence the COAST crew going with "Cascadian Dark Ale." It is dark, but it's more of a muted dark brown than anything, with a slightly off-white head, again differing from distintcly tan-to-brown head you'd see on a regular IBA.

But, oh my, does it have hops. Hops out the wazoo. The beer is chock full of Cascade, Centennial, Columbus, and Citra hops. If I heard right, 31 pounds of those bad boys went into brewing this batch, which is close to 50% more than is put in their flagship HopArt IPA. The mix of varietals makes the experience of drinking this beer completely dominating. I tasted every traditionally "hoppy" note - pine, grapefruit, spice, citrus fruit, tropical fruit, you name it, it's in there. And at 6.5% ABV, the malts don't stand a chance. This one is all unrelenting humulus lupus, and unapologetic about it.

Event Horizon is available for tastings and growler fills ($16) at the brewery, and was sent out to stores & bars beginning this week so keep your eyes peeled. Cheers to COAST for another killer beer.  I just found the name is in reference to the phenomenon, not the movie, but it probably won't stop me from renting it so I can drink this while watching Larry Fishburne pwn things.

COAST Brewing is located at 1250 N 2nd Street in North Charleston. Tastings, tours, and direct sales are available on Thursdays from 4 p.m. to 7 p.m. and Saturdays from 11 a.m. to 2 p.m. Follow them at @COASTBrewing on Twitter for updates.