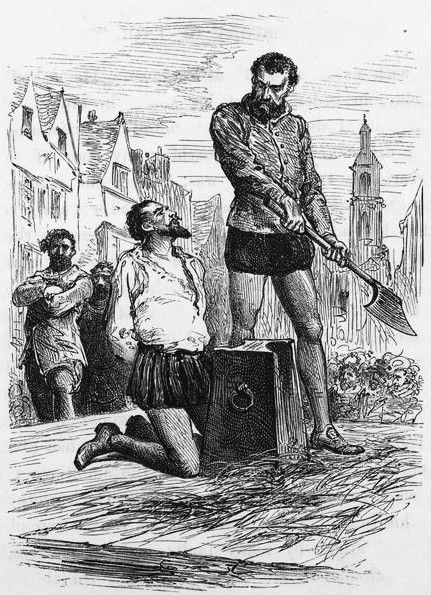 Sir Walter Raleigh is most noted for early attempts of colonization on Roanoke Island in what would become North Carolina. He was twice imprisoned in the famed Tower of London and eventually sentenced to death on charges of plotting against King James of England and attacking a Spanish outpost. However, his beheading was primarily due to his failure to return from the New World with vast riches. Raleigh was an adventurer, writer, explorer, poet and soldier for whom North Carolina’s Capital is named. Sir Walter Raleigh helped create a new world order.

Sir Walter Raleigh twice failed in attempts to establish permanent English settlements on Roanoke Island. Queen Elizabeth knighted Raleigh in 1585 and granted him a charter to explore and settle the New World. He financed the attempted colonization with his own money. Sir Frances Drake brought back these first settlers, who had become discouraged.

Raleigh began a second colonization attempt in 1587 on Roanoke Island. When John White, leader of the colony, returned to England for supplies, he was grounded and unable to return. Queen Elizabeth had ordered all large ships to remain near home to fight the Spanish Amada’s invasion of England. By the time the supply ship could return to Roanoke Island in 1590, the settlers had vanished leaving the name of a nearby island, “Croatan,” carved on a tree. The fate of “The Lost Colony” remains a worldwide mystery.

While Sir Walter Raleigh was among the more confident, adventurous and well educated men of his period, a series of events began to unfold that led to his beheading. Raleigh was one of Queen Elizabeth’s favorites. She bestowed on him a great deal of property and they exchanged poetry. In 1591 Raleigh secretly married Elizabeth ‘Bess’ Throckmorton, maid of honor to the Queen. The marriage was discovered when Bess became pregnant and the Queen was furious because they had not asked permission. The Queen was also, rumor had it, jealous. Raleigh and Throckmorton were imprisoned in the Tower of London. Mercifully, one of Raleigh’s vessels soon captured a Spanish treasure ship and Queen Elizabeth, upon receiving her share of the bounty, released the couple.

Raleigh began an expedition to investigate stories of a city of gold around Guiana and Venezuela. His book, “The Discovery of Guiana,” set in motion the El Dorado vision of a city of gold. His stories and voyages inspired other explorers and resulted in more territories claimed for England.

When Queen Elizabeth died in 1603, Raleigh’s enemies gained power. King James did not care for Raleigh and wanted peace with Spain. Raleigh was charged with plotting against the Crown and sentenced to death. All seemed aware his trial was a sham. King James, rather than imposing death, imprisoned Raleigh in the Tower of London.

By 1616 King James was short of money and decided release Raleigh and send him in search of El Dorado with the stipulation that Raleigh could not attack the Spanish. Raleigh, however, found the Spanish in territory he had previously claimed for England. Raleigh attacked the Spanish, lost his son in the battle, and failed to find gold. A special commission was set up to try Raleigh upon his return but the commission would not convict. King James utilized an earlier death sentence to execute Raleigh. Crowds watching his execution lamented that there would never be another Sir Walter Raleigh.

Sir Walter Raleigh, along with the Spanish, had helped begin the colonization of what would become the United States of America. Despite his death colonies would follow in Jamestown and Plymouth. In 1670 the English would successfully colonize Charleston (originally Charles Town). Raleigh’s vision of colonization lived, thrived and inspired other adventurers. Certainly the world was forever changed.

Gordon Mercer is past president and on the Board of Trustees of Pi Gamma Mu International Honor Society and professor emeritus at Western Carolina University. Marcia Gaines Mercer is a published author and columnist. We love Charleston and have a place in nearby Garden City.