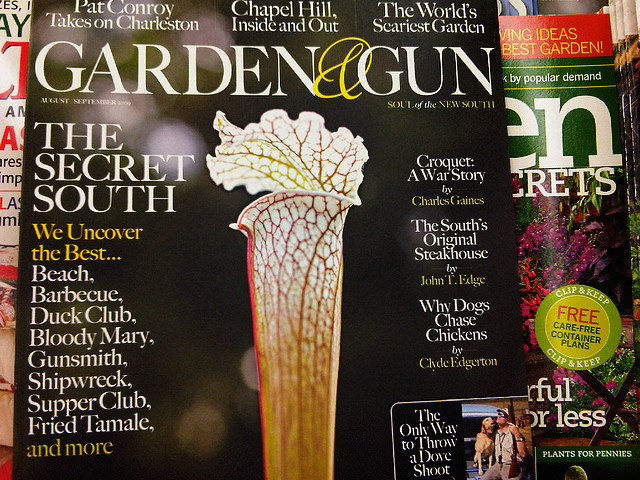 Assured five years of support by the parent company of The Post and Courier, Charleston-based magazine Garden & Gun looked like it was assured a path to success.

But that blanket shriveled in early 2009 when Evening Post Publishing backed out only two years after the magazine had been founded, and the future looked quite dim.

With that tale of struggle Christine Haughney has written a profile for The New York Times, in part:

David DiBenedetto, the editor in chief, recalled that when the magazine's color printer broke, the staff did not have the money to replace it for two months. They had to print out proofs at a nearby Kinko's.

"You didn't know if you would be there the next week," Mr. DiBenedetto said as he picked over a lunch of peach soup, fried green tomatoes and catfish at Charleston's Husk restaurant. He and his wife moved here from New York so he could work at Garden & Gun. "You just didn't know if the lights would be on."

You can read the paper's full profile over here.

Now that the end of 2013 is upon us, the magazine is clearing towards six years — and its painful transition to funding independence is long behind.

Incidently, Haughney also offers an amusing tidbit about the magazine's name: "Garden & Gun’s first editor in chief, John Wilson, suggested the title after taking a date to Hank’s Restaurant in Charleston and learning that it used to be a gay bar called the Garden and Gun Club."

And here I had always heard that it traced back to a old garden and hunting club in Charleston.