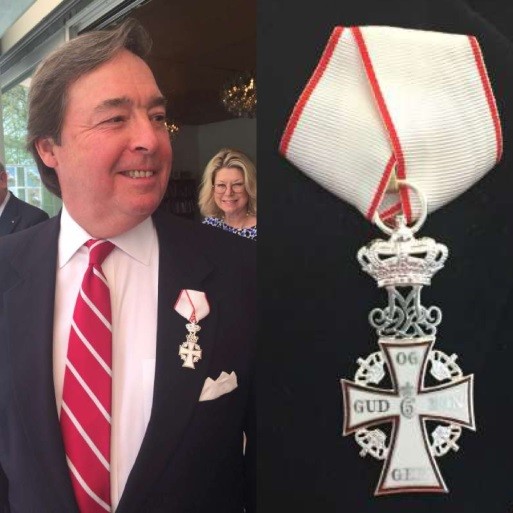 Charleston, SC –Nexsen Pruet attorney Brad Waring has been appointed as a Knight of the Order of Dannebrog by Denmark’s Queen Margrethe II.  Waring attended a knighting ceremony at the Danish Embassy in Washington, DC on April 19th.

The Order of Dannebrog was instituted by King Christian V in 1671.  It serves as a means of honoring individuals for meritorious civil or military service, contribution to the arts, science, and business or for those working for Danish interests.

Waring, who is Honorary Danish Consul for North Carolina and South Carolina, joined three other newly knighted consuls from around the country.

“This and other similar consular programs are having a positive impact on business relationships across many industries,” said Waring. “We are called on to help with all sorts of matters related to trade, investment and tourism. But, we are also here to support Danish citizens who are working, living or visiting our part of the country – it’s very rewarding.”

You may recall, in 2009 Waring assisted in arranging for Denmark’s nautical ambassador, The Danmark to visit the Port of Charleston.  Residents and tourists were able to visit the tall ship which trained thousands of American service members during World War II.  Learn more about the work of the Danish Consulate in Charleston, SC.

Nexsen Pruet, LLC is one of the largest law firms in the Carolinas, with more than 190 attorneys and offices in Columbia, Charleston, Greenville, Hilton Head, and Myrtle Beach, S.C. as well as Charlotte, Greensboro, and Raleigh, N.C.  Founded in 1945, Nexsen Pruet provides a broad range of legal services to the business community and represents companies and other entities in local, state, national, and international venues. More at www.nexsenpruet.com.

Head to the source at facebook.com
Advertisement