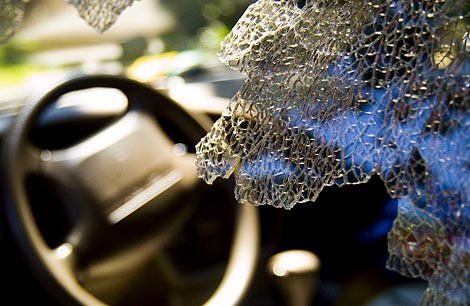 Update February 24: The Charleston City Paper got ahold of the police report. In it the tow truck driver says he did what he did because his hand was stuck in the luggage rack as she drove off.

Seems to be getting a little more clear now.

First reporting: Greg Hambrick over at The Charleston City Paper has been sent a pretty interesting account of a towing dispute in downtown.

In part:
The friend went over to negotiate the release of her car from the tow truck driver. Meanwhile, the woman got in her own car and tried to exit the parking lot to avoid getting towed herself. She says the tow truck driver saw that she was leaving and jumped on the side of her car, allegedly punching the driver’s side window as she continued to exit the parking lot.

The tale gets messier from there, with shattered glass and the woman arrested for trying to take the car as the tow truck operator had a "mechanic's lean."

Essentially that idea states that the tow truck operator gets to keep the car until he is paid for his "services" rendered.

Go check it out.

It's an issue that I've always wondered about: At what point is the tow truck operator owed money? Can he be owed anything before the chains are attached to the car?

And even if the tower is owed money, does it give him the right to assault the driver to take the car? Is a store owner allowed to punch a shoplifter?

Will be interesting to see how the dust settles. Hambrick is promising more details. -- We'll let you know.

Oh, and it's worth reminding that this is, naturally, a one-sided account.

Update February 23, 11 p.m.: News 2 shares some of the local regulation surrounding towing operations -- but nothing there directly applies to the meat of this incident.