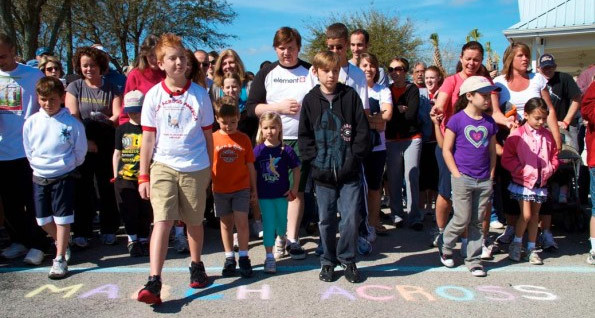 Image by Brett Brownell, Philanthropy Project Zach Bonner steps across the starting line to begin his "March Across America" on March 23. Zach, 12, will walk 2,478 miles from Tampa to Los Angeles to raise money for and awareness of the plight of homeless kids in America.

A movie based on the true story of a 6-year-old boy whose efforts to help after a Florida hurricane turned into a national effort to assist homeless children will be filmed in Charleston, and a casting call will be held from 1 to 7 p.m. on Wednesday, April 28, at 620 Dobbin Road in West Ashley.

They're looking for children ages 9 to 11 and adults 18 to 80 to audition for more than 40 parts. If you have a headshot, bring it with you.

"We have a number of speaking roles and are looking for talented actors. You don’t need an agent," said Barbara Kelly, executive producer. She said local actors close to Charleston are preferred and that extra roles are not being cast at this time.

"Little Red Wagon" is based on the story of Zach Bonner, who as a 6-year-old in 2004 collected 27 pickup trucks full of supplies such as water and tarps in his wagon to help neighbors hit by Hurricane Charlie. He then established a foundation to help homeless kids and distributed 400 backpacks full of school supplies. Now 12, Bonner has raised more than $1 million and has begun a “March Across America” to raise awareness of the plight of homeless children.

“Though this story takes place in Florida, South Carolina delivered a package of improved incentives and a ready-to-hire crew and supplier base,” said Film Commissioner Jeff Monks, “leading the producers to select South Carolina over competing states.”

Much of the text for this report comes from the press release.