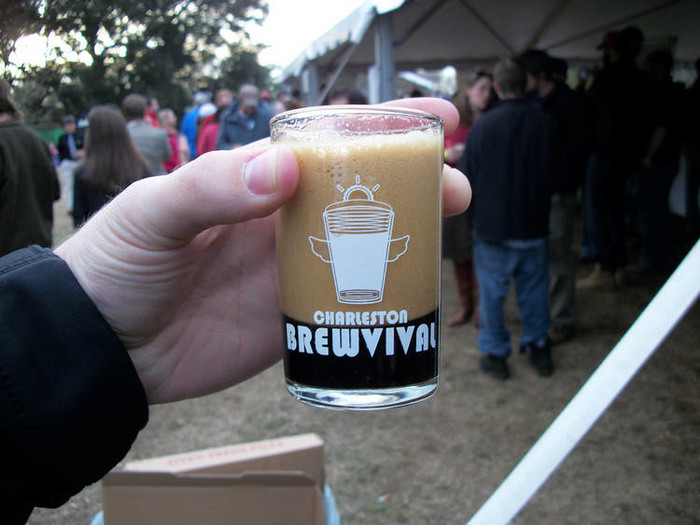 Image by Me I am also available for hand modeling.

Update February 19: Grub is an important part of any beer festival, and Brewvival is no different.

This year they are really upping the ante with four food vendors (five lines) on the premises, serving up reasonably priced, fest-friendly goodies:

Side note: The Digileaks have ceased because beers are being added to the official site at an alarming rate.  Stay tuned over there, but only if you like staring at a computer screen with your mouth agape.

Update February 13: Going side-topic for just a bit about music.

On February 26th, Brewvival will also bring out food vendors in musicians to accompany all those tasty pours, and details are out about the three who will be playing bringing jazz, Latin, Cuban, and rock to the festival — read about it at the Charleston City Paper.

Update January 26: Just when you thought the leaks were plugged, here comes the latest on Stone Brewing Co.'s lineup for the fest.

This information is brought to you by way of a microscopic, remote camera thrown into the mouth of brewery CEO and Co-Founder Greg Koch while making his infamous #gregface prior to last year's fest.

Update January 20th: The second annual appearance of Allagash Brewing at Brewvival promises to be a very special one.

At least that's message we got back from the Portland, Maine brewery via our east coast relay team of reconnaissance carrier pigeons.

Update January 16th: If you were at last year's Brewvival, you might remember the gang from Thomas Creek Brewery serving a doppelbock with chocolate shavings, or a double IPA run through a Randall full of whole cone hops.

They are poised to repeat the trend this year, adding some zany ingredients to a more select group of base beers.  Big ups to Mr. McWhiskers, who was paid handsomely after being sent into the brewery with a tiny Bluetooth receiver on his collar to get this info.

Update January 13th: The Foothills Brewing lineup for Brewvival has been partially announced on the official site.

We'll rehash those below. For those keeping score, that makes the last beer listed here the only Digileak in this update, obtained with the help of famed Cheaters P.I., Detective Gomez.

Update January 9th: As with any top secret affair, the price of secrets decreases as we get closer to the event.

Lucky for you readers, getting the rest of the Bell's lineup from our confidential informant(s) only cost us a hot lunch and a back rub.

First reporting: After an extensive investigation involving fake moustaches, dumpster diving, and a Ouija board, we here at TheDigitel have uncovered some very sensitive information: the scoop on four beers that will appear at Brewvival 2011 (in addition to COAST's Blackbeerd, which was announced early on).

When you get done drooling, remember that Brewvival 2011 will be held on Saturday, February 26th from 12 p.m. to 6 p.m. in the field across from COAST Brewing, 1250 N 2nd Street in North Charleston.  Tickets are $50 in advance and are available at Charleston Beer Exchange, or COAST Brewing during tour/tasting hours, for cash only.  They can also be purchased online here.  Designated driver tickets are available for $10 as well.