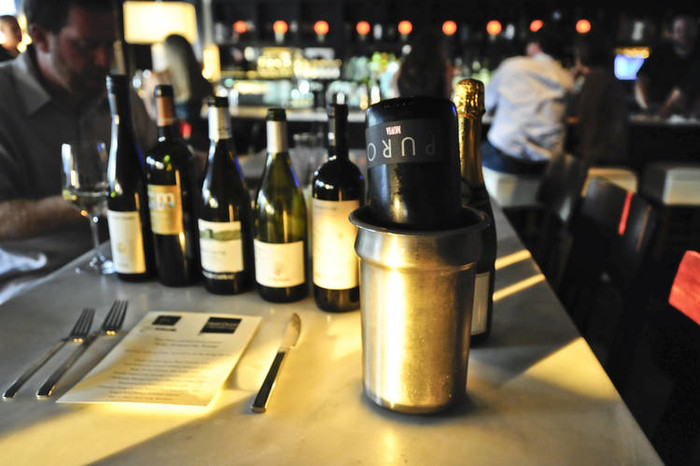 Last month Next Door Restaurant hosted their first in a series of dinners featuring a seven course tasting menu with regional wine pairings for $45 per person. This past monday I had the opportunity to enjoy their second such event.

Next Door is a newer venture from Executive Chef Ben Berryhill and his partner Charlie Chance, of Red Drum in Mount Pleasant. Unlike Red Drum's more constant menu, the one at Next Door is ingredient driven, regularly changing based on local and seasonal items. Luckily for the diner, Sous Chef Nathan Hood ensures that both menu regulars and special offerings are true delights. 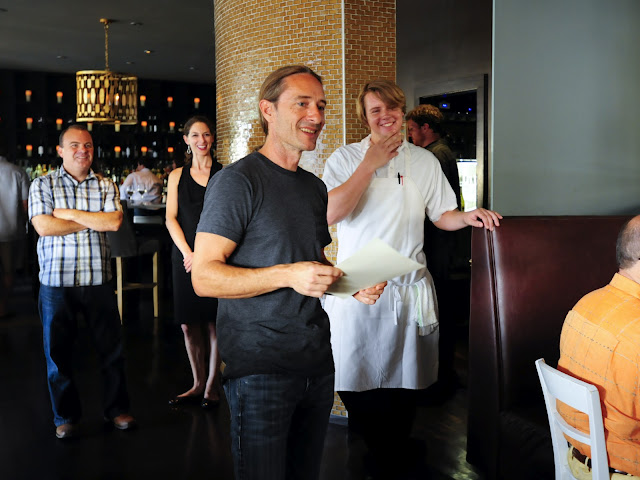 I've been going to Red Drum for close to 7 years now and I know to expect consistency and a welcoming atmosphere from Chef Berryhill. He and his team take a hands on approach and they are never far from either restaurant to ensure quality. Next Door, just shy of reaching its first birthday, is still working on gaining a solid following. Berryhill concedes that the pace has been slower than he would like, but he is confident in word of mouth. 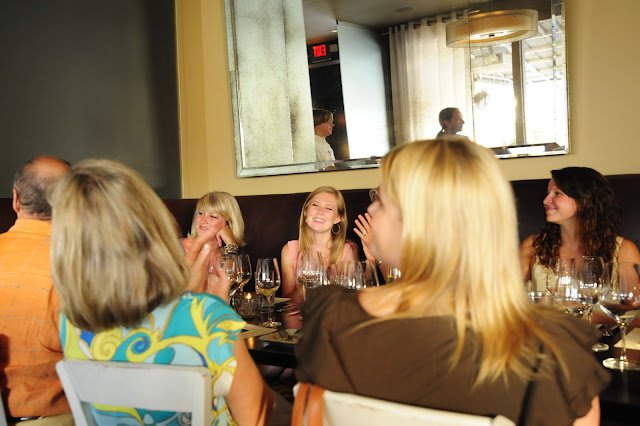 Guests enjoying their meal and wine. 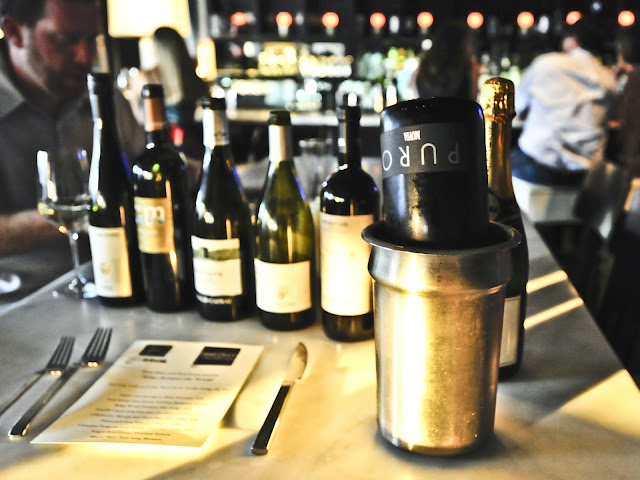 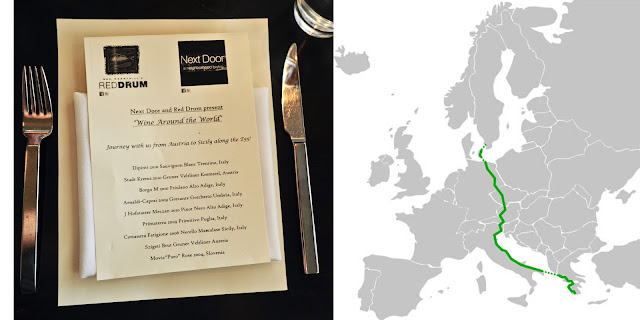 The July 2nd dinner featured wines from Austria to Sicily, along the E-55 Auto Route. For me the wine stars of the evening were the white Borgo M. Friulano 2010 from Alto Adige in Northern Italy, and the red Cottanera Fatagione Nerello Mascalese 2006 from Sicily. Both of these are beautiful summer wines. The Friulano is a rich, nutty white which came with a creamy chilled cucumber soup and dill whipped cream. Both Chardonnay and Pinot Grigio lovers can agree to go gaga over a bottle of this. Nerello Mascalese is a fairly unknown red grape grown in the volcanic soils of Southern Italy. It has an inky quality balanced by acidity and the fruity flavor of fresh grape skins. Paired with a lovely light summer tomato sauce over al dente orecchiette, this combo could not be beat.  John Julius of Ben Arnold Beverage Company and Sous Chef Hood both pointed out how natural it is to pair Southern Italian wines with the summer foods we enjoy in Charleston because the regional cuisines both revolve around gorgeous ripe tomatos and tons of fresh seafood. 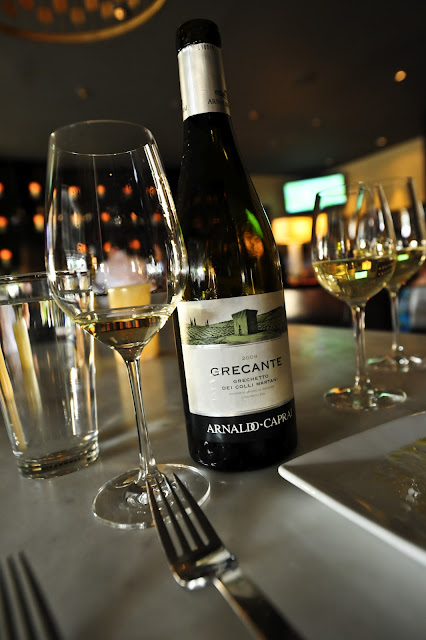 Although the food was very enjoyable and the wine pairings were spot on, the experience fell a little short in execution. The temperature of individual components seemed to be a problem. I also noticed a lot of variation in the doneness of the meat courses. Most importantly for me seemed to be the errors in service from this particular crew. The servers were unable to tell us what they were serving during multiple courses. Plus, the menus were incorrectly printed, leaving my table mates and I rather confused about what we were eating. As the front room filled with regular diners our wait got much longer. This left the wine drinkers to get a little rowdy, but on the plus side it allowed some time for John to teach us a little about why the pairings were chosen and the regions the wine came from. There were a few missteps, but I'm confident that these particular issues will work their way out as the servers gain more experience. On previous trips to the restaurant I have experienced flawless and confident service along with fantastic food.

As an added bonus we got to watch the guys uncork bottles of Movia Puro. I know that doesn't sound exciting, so let me explain a bit. This particular wine is made in a method champenoise stlye, the same way champagne is produced. The wine has sediments in the neck of the bottle from the aging yeast which must be removed. This process is called disgourging and is usually done at the winery. However, Puro chooses to leave the sediment in the bottle as a fun gimmick for restauanteurs and the like. Basically, you have to store the bottle upside down and open the bottle in water in order to clear the sediments. It creates a bit of hoopla for the viewers, and is a yummy wine for the drinkers. 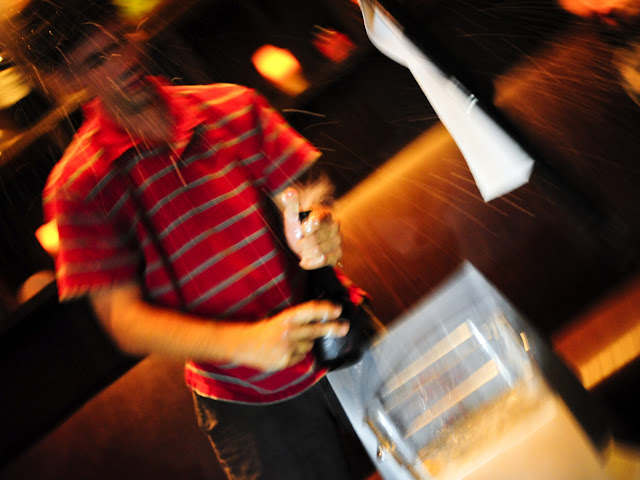 Overall, I was impressed by the pairings and how well they suited the delicious food. Next Door just needs to polish their corners when it comes to wine dinners. However, Berryhill is a fabulous mentor for the young Sous Chef Hood, and I think with a little more time the two will shine.

[Editor's note: Get more of Good for the Palate's work and writing at her website.]