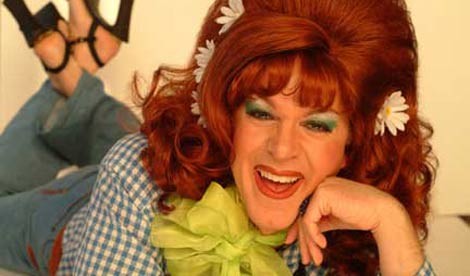 It's quite a performance, Charleston City Paper quotes:
"It better be Tupperware, because otherwise you're going to get that cheap crap that'll melt in your microwave, get all stained, and what's gonna happen when your friends come over and see that?

"You don't want that because you just know they're going to go to church and start talking behind your back. Like when you're having sex with somebody else's husband and everybody's like, 'You know what I heard at church?' and one thing leads to another and it gets all ugly."

Dixie Longate's Tupperware Party is a strange thing, half performance and half Tupperware show (she's their number two seller). Dixie is from Mobile, Ala., and claims three children, multiple prison sentences and talks of the South in a way reminiscent of Borat talking about Kazakhstan.

It's a Tupperware party done full tilt. Started on a dare to do his own party "as a ’50s housewife, and do it in drag." The best way to get a feel for it is perhaps to watch the video.

It's a hit off-Broadway act that is getting ready to tour the nation.