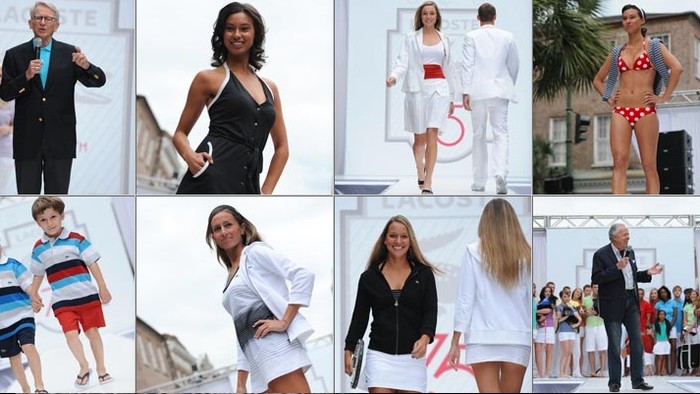 Update, April 13: The show will be held in the Riviera Theater due to threat of rain. It's at 225 King Street.

Also, note that that portion of King Street will be closed to traffic from 1 to 8 p.m.

From a press release:

Just as the Family Circle Cup epitomizes women’s tennis, LACOSTE represents the essence of sportswear, and the two have come together to showcase the excitement and grandeur of professional tennis competition. LACOSTE, one of the world’s most well renowned brands with over 1,000 boutiques worldwide including a location at 248 King Street in historic downtown Charleston, returns for the fourth consecutive year as the official apparel sponsor of the Family Circle Cup. To continue the partnership in style, LACOSTE and the Family Circle Cup will present the clothier’s latest fashions for men, women and children at the fourth annual LACOSTE Fashion Show between Market and Hassel Street at 6:00pm on Monday, April 13th. The Family Circle Cup is scheduled to be held April 11-19, 2009 at the Family Circle Tennis Center in Charleston, South Carolina.

Since 2006, the LACOSTE Fashion Show has recruited local models to walk the runway on King Street in the newest LACOSTE spring fashions. Keeping in this tradition, men and women ages 18-23, and children ages 6-8, were invited to attend an open casting call for models at the Charleston Place Hotel to audition for the show. The models chosen at these casting calls will appear multple times throughout the fast-paced fashion show, wearing several outfits each after very quick outfit changes. If you know anyone who has made the cut, come out to support them as they have an experience to last a lifetime in front of thousands of fashion fans.