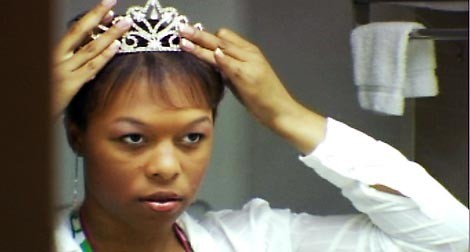 'Bama Girl, by Rachel Goslins, will play in Charleston as part of the Southern Circuit Film Series. The film chronicles one girl's desire to become homecoming queen despite the obstacles of bias based on money and race.

Here's a bit about the film from the festival:
The Crimson Tide’s homecoming has a rich history, tied into centuries of privilege, old money and racial exclusivity. This powerful and enlightening documentary follows Jessica Thomas’s quest to become Homecoming Queen at the University of Alabama. “’Bama Girl” is the story of one black woman running against not only 15 other co-eds, but also a strictly segregated Greek system, internal black politics and, most ominously, a secret all-white association called “The Machine” that has been controlling politics at the University for most of the past century, including the Student Government and Homecoming Queen elections. Along the way the film divulges some surprising realizations about black vs. white, about Old South vs. New South, and about a surprising microcosm of electoral politics that mirrors much of what is happening across our country today. “’Bama Girl” has screened at SXSW in Austin, Texas, and at the Atlanta Film Festival.

The film plays at Friday, April 17, at the Halsey Institute of Contemporary Art, at 54 St. Philip Street.