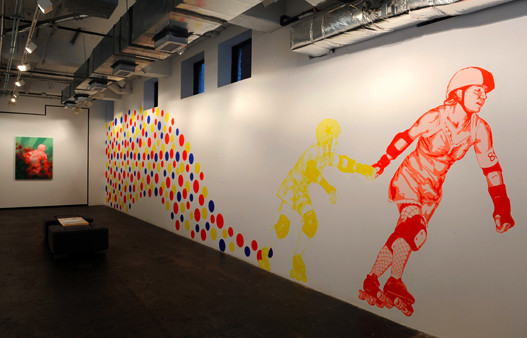 Update June 4: Redux has added a slew of photos from the opening night, you can check them out on Flickr here.

Oh, and there was a write-up by the City Paper that I had missed; link.

Update May 27: The Charleston City Paper was there and has a short write-up and, more interestingly, a 3-minute video. The first half is some nice shots of the "parade" and the second is a chat with Cory Oberndorfer; check it out here.

First reporting: Cory Oberndorfer has a focus on icons, color, large scale, and roller derby -- and for his artist in residency show at Redux there's also a focus on a street parade.

Oberndorfer has been creating paintings for his "Novelty" in Redux's gallery space as well as on the façade of Redux during his three-week residency from May 8 – May 26. And the exhibition opens with a skating parade and reception on Wednesday, May 26, from 6 to 10 p.m.

Inspired by graphic design, Oberndorfer's work aims to transform roller derby skaters into icons to convey both idolization and a sense of product identity, drawing inspiration from three of his favorite things, “sweets, pop culture and bad-ass women, although not necessarily in that order.”

The Lowcountry Highrollers will be on hand for the street parade in downtown Charleston surrounding the event. So bring your skates or other non-motorized transport along with a style of roller derby like tutus, tights, and sparkles and join in.

Redux is on upper St. Philip Street in downtown Charleston.