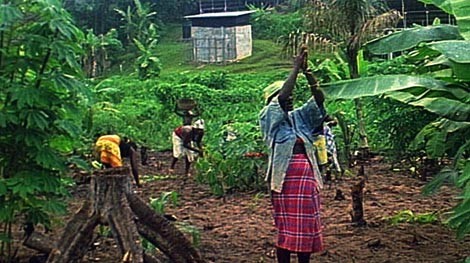 Tjuba Ten (The Wet Season), by Ben Russell, will play in Charleston as part of the Southern Circuit Film Series. The film is "an experimental ethnography recorded in the jungle village of Bendekondre".

Here's a bit about the film from the festival:
“Tjúba Tén” (“The Wet Season”) is an experimental ethnography recorded in the jungle village of Bendekondre, Suriname at the start of 2007. Composed of community-generated performances, reenactments and extemporaneous recordings, this film functions doubly as an examination of a rapidly changing material culture in the present and as a historical document for the future. Whether the resultant record is directed toward its subjects, its temporary residents (the filmmakers), or its Western viewers is a question proposed via the combination of long takes, materialist approaches, selective subtitling and a focus on various forms of cultural labor.

In addition to “Tjúba Tén” (“The Wet Season”), Russell’s screenings will feature three additional experimental ethnographies: “Daumë,” “The Red and the Blue Gods,” and “Black and White Trypps Number Three.”

The film plays at 8 p.m. Friday, November 7, at the Halsey Institute of Contemporary Art, at 54 St. Philip Street.

Russell will be available for a Q&A after the showing.