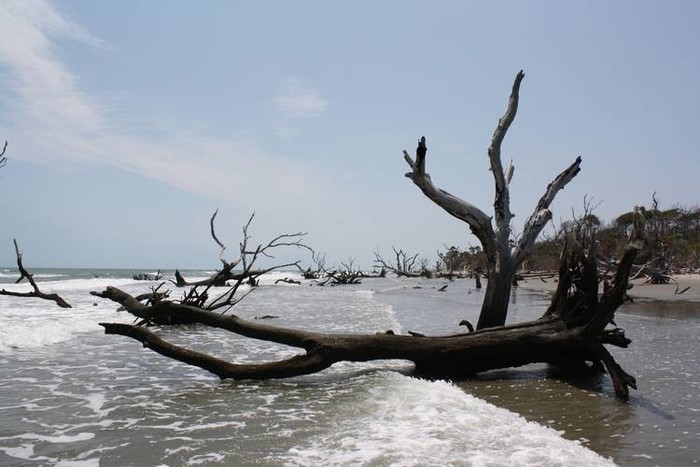 Coastal Expeditions is sponsoring a special trip to the North End of Bulls Island with special guest Bob Raynor on July 17th to benefit the Sewee Association.

This rarely offered trip brings guests directly to one of the most secluded and pristine beaches in the Lowcountry for shelling, swimming, birding, and a chance to reconnect with nature.

“The beach on Bulls Island is not a place...It is an experience... a vast stretch of primordial sand littered with shells, sea creatures and extraordinary bird life.” said Chris Crolley, steward of Coastal Expeditions.

The trip begins with a 40-minute naturalist-led boat tour through the saltmarsh estuary. Right now it is loggerhead nesting season so there is a good chance to see a nest or a loggerhead turtle in the estuary on the cruise to Bulls Island. Upon arriving at the North Beach of Bulls Island, Bob Raynor will lead an interpretative walk, discussing the natural and cultural history of Bulls Island and Cape Romain. Guests will be able to explore the beach at their own pace and will be able to visit a shore bird rookery. The North Beach is full of whelks, sand dollars and many other types of shells as well as Native American pottery. Boneyard Beach, one of nature’s most magnificent works of art in the Lowcountry, is a short walk away.

“North Beach is the most dynamic part of Bull Island,” said Bob Raynor. “It is here where the natural world meets the human world and I am excited to be able to share this incredible nature preserve with others.”

Cape Romain, home of Bulls Island, is one of only two Class One Wilderness Areas on the eastern seaboard and is home to a large population of nesting loggerhead sea turtles, bald eagles, bottlenose dolphins and a staggering 277 species of birds, including rare Red Knots, several species of terns, ospreys, and a plethora of other shore birds. Seven miles of Bulls Island’s beach are part of the longest stretch of undeveloped coastline on the east coast and allow for unparalleled shelling, beach combing and exploring.

This adventure is offered in support of the Sewee Association, the "friends group" to Cape Romain National Wildlife Refuge.  This organization contributes to the Loggerhead Sea Turtle project, creating and administering grants to the refuge, as well as servicing the stewardship mission of environmental education, reaching thousands of young people.  All proceeds of this event will go directly to the association and the fee for the outing is tax deductible.