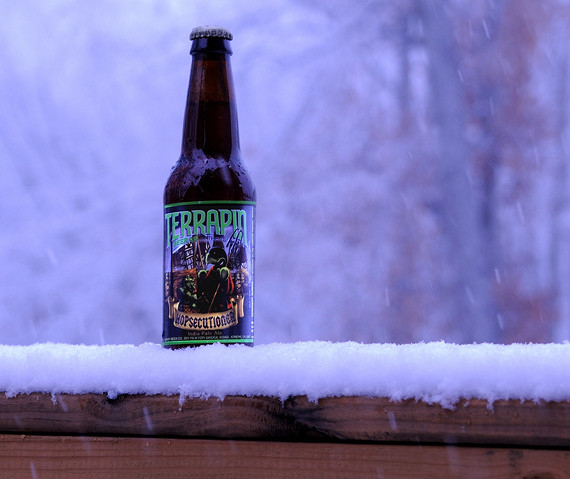 Image by Flickr user Speed-Light Use this picture to battle your heat stroke while you enjoy the words below.

The Charleston Beer Exchange gang is going to be entirely busy this week bringing beer to the masses in three different venues.

First up it's the crowd-pleasing Rare Beer Tuesday.  This week's 5 p.m. delight is a complicated one.  At its core is Terrapin Hopsecutioner (7.2% ABV, B+, 97), an IPA recently added to the Athens, GA brewery's year-round lineup.  The beer will be presented in a cask, which means a small vessel filled with a naturally carbonated version of the brew that needs to be consumed quickly (ideally same-day) to ensure freshness.  Furthermore, the beer has been floated on bourbon and oak, additional components not often seen in conjunction with IPAs.  It will be interesting to see the outcome of these flavors duking it out in the firkin, so don't miss it!.  CBX lays in wait at 14 Exchange Street downtown.

Next up, it's a New York-centric beer dinner being held at Carolina's (ironically) on Wednesday at 7 p.m.  All six courses will be paired with a craft beer brewed in New York state.  Check out the full menu in a PDF, and reach them at (843) 724-3800 to reserve your $60 seat.  Carolina's is located a stone's throw from CBX at 10 Exchange Street downtown.

The whirlwind week wraps up with a two-night stand at The Coastal Cupboard in Mount Pleasant, where the CBXers will be holding a beer tasting and glassware class featuring the Spieglau line of beer glasses.  The right glass is an oft-overlooked, but important component to fully experiencing a beer.  Different shapes work best with different styles, mainly by the way they bring the aroma to the nose via the beer's head.  Sites like BeerAdvocate have entire pages dedicated to glassware, but what better way to learn than in-person with a selection in front of you?  Classes will be held at 7 p.m. both Thursday and Friday evenings.  The cost is $50 per person, which includes a full set of Spieglau Beer Classics to take home!  Reservations are required, so call (843) 856-4321 to make them.  The Coastal Cupboard is located at 664J Long Point Road in the Belle Hall Shopping Center.