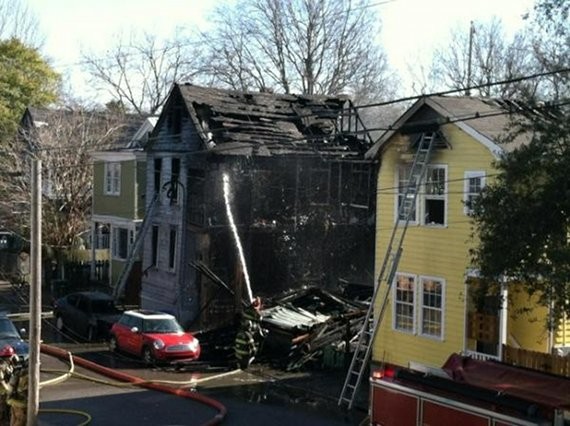 Update January 9: Raw video posted by Live 5 News from today's court hearing sheds new light onto what exactly happened the day that five houses and three cars were damaged by the massive fire on Nunan Street.

Here's what prosecutors had to say:

...the teen went to a home on 13 Nunan Street around 9:50 a.m. to fight someone and when he found no one, kicked in the back door. According to court officials, when the boy saw no one was home, he took out a red lighter and set the back door curtains on fire.

Update January 7: A 14-year-old boy is being accused of starting the fire that burned three homes, but there's also some good news.

J.P. Morgan, a﻿ friend of Josh Nunez whose home burned in the blaze, has set up a fundraising website for Nunez and is planning a January 20th benefit to help all those affected by the fire — I'll point you to ABC News 4 for details.

For more on the accused teen, I'll point you to The Post and Courier﻿'s report.

Update December 30: Live 5 News offers up a report that casts a suspicious eye on neighborhood kids.

Neighbors and the man who lived at the home of the epicenter of the flames tell of kids causing problems in the hours leading up to the blaze and an explosion with kids nearby just at the start.

Take a read of the station's report here.

Update December 29: No word on the cause and officials don't think it's linked to the serial arsonists' pattern of night-time fires.

However, given how quickly the fire spread to three homes the blaze is still being treated as suspicious.

There's also a couple better morning reports out there, The Post and Courier﻿ has updated with a few more details and ABC News 4 has a video report that includes some firefighting.

First reporting: A fire that broke out on 13 Nunan Street (map below) around 10 a.m. this morning has severely damaged three houses and two cars.

Luckily, no injuries have been reported.

With multiple reports out there, you'll get the most complete coverage from Andy Paras' Storify aggregation of Twitpics coupled with Andrew Knapp's report in The Post and Courier.