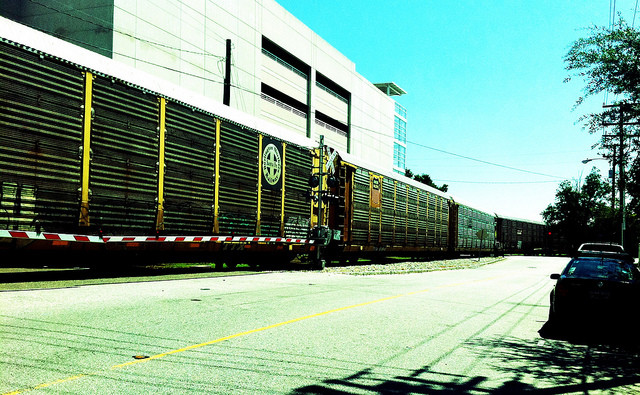 3:51 am on Thursday February 24, 2011 | Posted by Amanda Click
City of Charleston gets 'quiet zone' along Washington Street rail crossings

Image by TheDigitel That's where the horns used to blow on Washington Street.

Update February 24: It's a couple weeks into the new quiet zone and The Post and Courier has followed up.

Generally folks are happy but some nearby businesses, while welcoming the change, said the noise was never much of an issue; take a read of the paper's report here.

Worth noting that the City of Charleston has recently sold part of, and continues to advance development of, the neighboring Concord Park for office buildings, shops, residences, and a large public park.

First reporting February 10: The City of Charleston Department of Traffic and Transportation, the South Carolina Public Railways and the South Carolina Department of Transportation have worked together with the Federal Railroad Administration and prepared the necessary documentation petitioning for a “quiet zone” for train horns to be prohibited along the Washington Street rail crossings in downtown Charleston.

The City of Charleston informed all users of the rail line of the proposed “quiet zone,” as well as others, and the City received no objections from any parties.

On February 11th, the City will enact this new train horn “quiet zone” in order to continue to promote and improve the quality of life of those residents living near the railroad.

In addition, the City of Charleston Department of Traffic and Transportation, working with the South Carolina Public Railways, has been making safety improvements for the railroad crossings along Washington Street between Charlotte Street and Laurens Street in downtown Charleston. These improvements have included the installation of railroad crossing signs, protective gates, railroad signals, and pavement markings to alert and protect the motoring public as well as pedestrians in this area. These improvements have raised the level of safety along the four crossings on Washington Street.