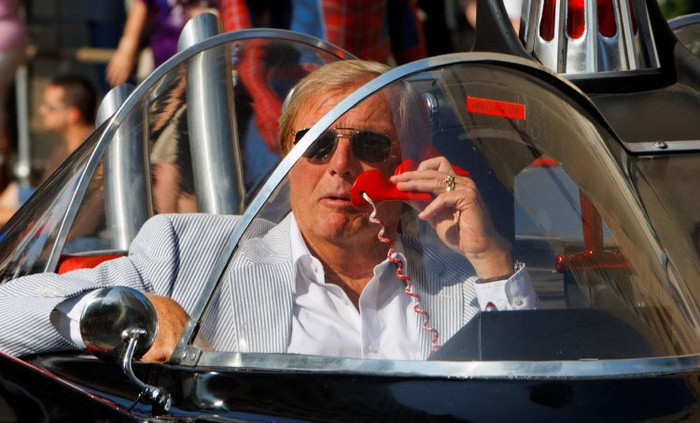 Image by Flickr user leshoward Image by 20091001-bat-phone.jpg No, they won't have the Bat Phone, but a bat phone-like phone.

Here's a smattering of pictures from the gathering.

Supporters of healthcare reform are planning to converge in Marion Square on Friday, October 2, from 10 a.m. to 4 p.m. to let South Carolina’s Senators and Congressmen know they want a change.

Yeah, I know, a lot of you are tired of hearing about healthcare rallies, but this one is reported to have a "bat phone style setup."

Here's all the details from a release:

Charleston, SC- The Batphone returns at an Organizing for America phone booth call effort at Marion Square on Friday, October 2 from 10 a.m. to 4 p.m. to reach South Carolina’s Senators and Congressmen with the message that America’s Healthcare crisis is a national emergency requiring a heroic response from citizens and government.

Supporters of President Obama will be invited to call their Senators and Congressmen and will have the opportunity to record their responses and share their thoughts with the President online, though the OFA website.

The Charleston effort has been themed with a bat phone style setup that will empower visitors to Marion Square Park, near the intersection of King and Calhoun streets, to make their voices heard.  Another mobile “batphone” may be deployed by student volunteers at the College of Charleston.

The Phonebooth for Healthcare Reform effort is being supported by Organizing for America, President Obama’s grassroots organization and the Charleston County Democratic Party.  The effort is being coordinated by Donna Ellington, who can be reached on Friday at 843-259-1863.

It ought to be extremely evident at this point this Health Law will drastically affect business, which is the reason such a variety of organizations are applying for these waivers. whiteboard video services. Notwithstanding, what isn't being accounted for on is the quantity of organizations that aren't being allowed these waivers, and the quantity of them that are being conceded in areas controlled by Democrats, similar to Nancy Pelosi's locale who clearly harbors 20% of the majority of the waivers allowed.

I liked this new style in health rally bring bat phone into rally and making interest in people about this rally by bring this type new things is good idea from the organizers. I have seen this bat phone pictures and in custom writing service article and good detailed information in it about this bat phone.