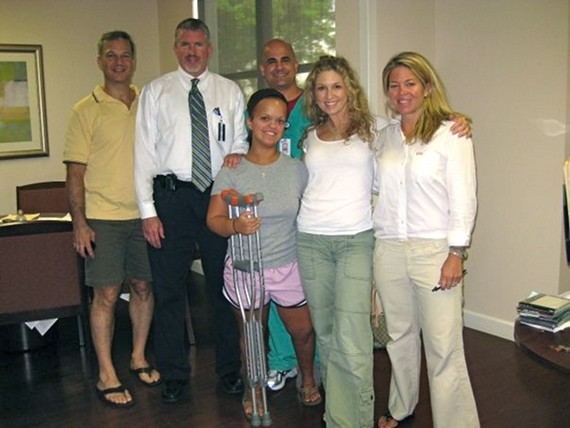 Twinty-six-year-old College of Charleston graduate Kristen DeAndrade has always dreamed of running again. As of recently, that dream has become a reality.

Born with dwarfism, few things have stood in the way of this young woman. At twelve years old she made the life changing decision to undergo a series of surgeries known as extended limb lengthening to correct several bone deformities. Thirteen years later, and with many thanks to her surgical team at the Paley Advanced Limb Lengthing Institute, Kristen walks straighter and thirteen inches taller. She also carries with her one of the most amazing life experiences.

“I never imagined that a series of medical procedures could teach me so much in life. Never again will I take the simple things for granted.”

After attending the College of Charleston from 2004-2009, DeAndrede anticipated going to graduate school and earning her masters degree as a physician assistant. Still plagued with joint pain she was forced to put her life on hold and endure one last set of surgeries. In March of 2011 the very same apparatus that she had worn thirteen years earlier was reapplied to both legs.

As the end to all of her limb lengthening surgeries draws near, Kristen is finally ready to achieve her goal of running. On December 4th, DeAndrade plans to run her very first 5K down in Palm Beach, Florida. “This is huge for me. Not only will I be able to run for the first time on my new, straighter, longer legs but I will be raising money for a cause near and dear to my heart.”

The 5K, a part of the Palm Beach Marathon, will benefit the Paley Foundation. “It is a 501-3c supporting the work of my orthopedic surgeon Dr. Dror Paley and his team at The Paley Advanced Limb lengthening Institute (PALLI) in West Palm Beach, FL. I wouldn’t be where I am today without Dr. Paley. He is truly a hero for me and hundreds of people from all over the world, saving limbs and saving lives.” DeAndrade hopes to raise two thousand dollars for the cause.

And it isn't just DeAndreade who plans to represent for the Paley Foundation. A whole group of patients and families are getting together to raise funds and participate in the 5K loop of the marathon. Last year they were able to raise just under $12,000 and this year they're hoping to raise even more.

“I owe so much to the PALLI team. What they have given me is priceless. Now it is my turn to help. This will also signify the end of my surgical journey, a way for me to celebrate my accomplishments and help others at the same time.”

To donate directly to Kristen DeAndrade's run for the Paley Foundation, click here. You can also keep up with her progress throughout the recovery process on her blog LittleLegsBigHeart.