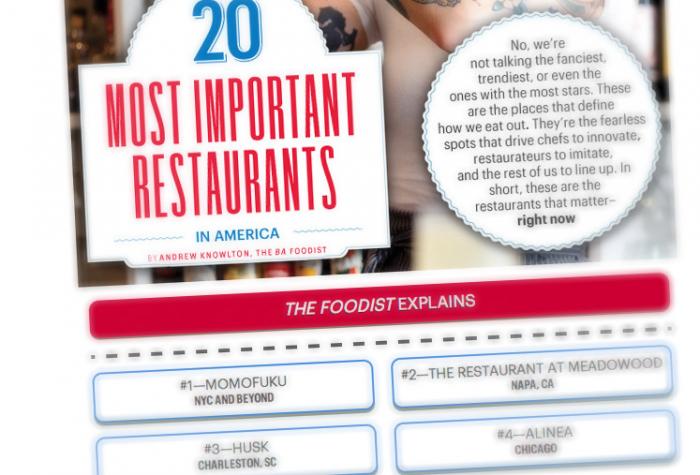 5:32 am on Thursday February 14, 2013 | Posted by Ken Hawkins | References Bon Appetit
Husk named to list of '20 Most Important Restaurants in America'

Bon Appetite has named Husk to its list of "The 20 Most Important Restaurants in America".

The downtown Charleston spot came in at No. 3, with the magazine saying:

"The secret to delicious food is good dirt and plant varieties." That's chef Sean Brock's mantra, and at Husk, the proof is in the (heirloom corn) pudding. Brock is also an evangelist for the Southern pantry. Everything he serves in this elegant 19th-century mansion comes from below the Mason-Dixon line, including many rare fruits and vegetables he cultivates himself.

The magazine also lists a few of Brock's staple ingredients.

At No. 1 is Momofuku in New York City and No. 2 is The Restaurant at Meadowood in Napa. Husk was one of only three restaurants from the South on the lists, with the other two coming from Austin and New Orleans.

As for why certain restaurants were or weren't selected for the list, the author, Andrew Knowlton, explains, in part: "This isn't an All-Time Greatest list or a Hall of Fame. It's a list of the spots where chefs want to eat today, the places on the forefront of what is happening in dining at this moment."

Bon Appetite previously named Husk as the “Best New Restaurant in America" back in 2011.

Husk's Brock, is no stranger to national recognition, winning the 2010 Best Chef Southeast James Beard award. Husk has been open since November of 2010.