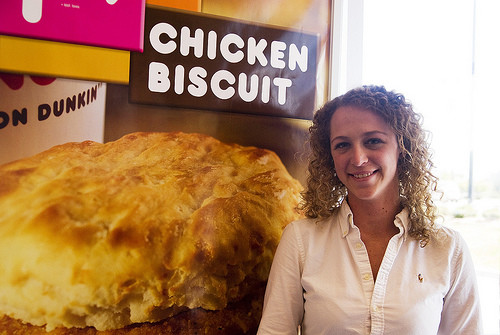 Tasty. The biscuit, I mean.

What came first? The chicken, or the biscuit?

If there is one thing I love, it's a good chicken biscuit. I remember sneaking away during study hall in high school to the local Mom and Pop joint in town to grab the steamy, greasy, fried, savory goodness that could only be a southern chicken biscuit.

Originally from Texas, I've lived in South Carolina for almost 14 years now, and sometimes I still feel like a stranger here. People still comment on my lack of a southern drawl, and I don't care for sweet tea.  But there is one thing that no one else can do better than the south can: chicken biscuits.

What exactly is a chicken biscuit, you ask? To put it simply, it's the culinary treasure of the south. It's a midly seasoned, deep-fried chicken breast expertly sandwiched between two halves of a moutherwatering, buttery, creamy biscuit.

After a few interesting emails and some bizarre conversations that seem to occur so often at TheDigitel, I've decided to embrace the one aspect of southern culture that I can relate to, and will take a tour of the south's best breakfast offering in the south's biggest culinary hotspot, Charleston.

Stay tuned, keep your eyes peeled, the gravy warm, and your napkins and ketchup ready.  From national chains, to the local hole-in-the-wall, I'll be reviewing Charleston's chicken biscuit offerings, and providing opinions and critiques that only a true chicken biscuit connoisseur could share.

Keep up with the posts on the Chicken Biscuit topic page, or snag the RSS.