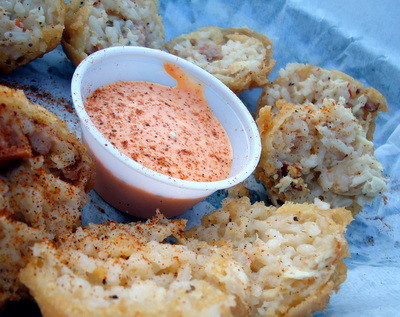 Update April 6th: On Wednesday, April 4th four area chefs who were named the finalist of this years Home Run Recipe Challenged gathered at TicketReturn.com Field at Pelicans Ballpark to show off their recipe and one was crowned the winner.

﻿"We're excited to give fans more of a variety of options every year [...] We really think this year is going to be extra special."﻿ said Pelicans Director of Food and Beverage Brad Leininger﻿ over at the Pelicans website.

As the winning dish at the Home Run Recipe Contest, Bog Balls will soon be on the menu at the ballpark and served throughout the 2012 season, with Socastee Station's name attached to it. Leininger said soon fans will be able to order Bog Balls at the Pelicans Picnic Pavilion behind first base.

The Pelicans have some more food news:

TicketReturn.com Field now has a License to Grill, the old picnic area down the right field line was chopped and replaced with the soon-to-open "Ring of Fire Grille." It will feature many new options such as fresh angus beef burgers, Italian sausages, bratwurst, and a premium rib eye steak sandwich.

Wiener-ville is also new this season! Located down the first base line, fans can create their own hotdog with up to 12 toppings. The 10-inch 'Pelican Dog' is the stand's specialty, and can be built to each fan's own mouthwatering specifications.

The new good eats spread throughout in the stadium. There are the Grille Stands down the first and third base lines, the Pepsi Grille on the first base side, and the Bullpen Grille down the third base side. The grille stands will now have a little taste of the south, offering fried bologna sandwiches and fried pickles to satisfy your appetite.

Read more about what's coming to the Pelicans Ballpark here.

First Report February 23rd: Last year the Pelicans called on local chefs for a simple challenge: make a great dish for them to serve at BB&T Field.

The challenge was very successful. Chefs from all over the Grand Strand signed up for the task and, in the end, Chef John Venuti of Captain John's Seafood Grill down in Pawleys﻿ Island took home the prize with his oh-so-good lobster roll.  It was not your typical "ballpark" fare, and that's what made it great.  This is exactly what the Pelicans were looking for.

The Pelicans are doing it again this year and are seeking chefs to accept their challenge. According to Myrtle Beach Restaurant News, participating chefs have to keep in mind that the dish sell for $10 or less, cost 30 to 45% of retail to prepare, and there is only one entry allowed per restaurant/chef.

Hop on over to Myrtle Beach Restaurant News for their full write-up that includes all the rules, how to sign up and what the winning chef will receive.