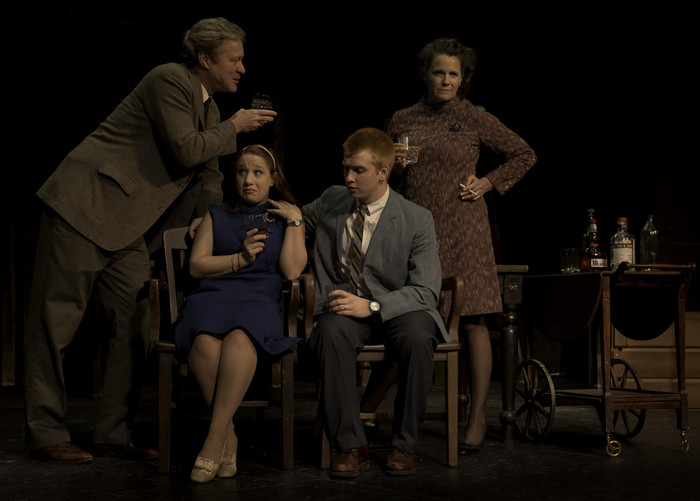 In its upcoming performance of “Who's Afraid of Virginia Woolf?" The Footlight Players act out what happens when love turns to hate.

“Who's Afraid of Virginia Woolf?" is one of the most disturbing love stories ever written. Central characters, George and Martha, give life to the adage that hatred is the other expression of love. The demons that lie in wait beneath the standards of middle-class career and marriage are awakened by their dysfunctional marriage routine.

George, a professor at a small college, and his wife, Martha, have just returned home from a Saturday night party. Martha announces that she has invited a young new professor and his wife to stop by for a nightcap. An unforgettable night of cocktails and crossfire follows, as George and Martha battle each other and their guests in one of the most notoriously dysfunctional, shocking and funny nights in the history of American theater

First produced in 1962, Edward Albee's script elegantly reveals the ugliness of inter-generational conflict and sexual warfare of the 1960s. The moment the play begins, we know if will be a fight to the death. Ultimately, George and Martha are all alone. With the illusion that had consumed their world killed, their lives are left to balance between fear and hope.

"My talented and dedicated cast and crew have worked extremely hard bringing audiences this gripping story," said director Don Brandenburg. "We hope audiences are moved by Albee's brutal lullaby, which has remained an unmatched piece of theatrical blood sport for more than 50 years."

Don Brandenburg (director) has worked as an actor, director and producer with more than 75 shows to his credit. He was last seen on the Footlight stage as Bastien Andre in "Is He Dead?", Maxim de Winter in "Rebecca" and as Ricky Jim Robinson in "The Delta Syndrome." Brandenburg is also artistic director for The Footlight Players.

Paul O’Brien (George) has been in production of “Camelot” (King Arthur), “Bug” (Dr. Sweet) and “Cat on a Hot Tin Roof” (Gooper). He was recently in “Evita” (Juan Peron), a Wanderings Stars production for the 2014 Piccolo Festival and “The Foreigner” (Froggy) with Charleston Stage. He grew up in Charleston, moved away and later returned where he is a physician at the Medical University of South Carolina.

Missy Wolff (Martha) is making her debut with The Footlight Players. Recent Charleston credits include “Butterflies Are Free” (Mrs. Baker) with Charleston Stage Company. Notable off-Broadway credits include Mattie in “Breaking Bottles” and Anna O in Freud’s Pathway at the American Theatre of Actors in New York City.  Wolff’s film credits include “Fried Green Tomatoes” and “Love Transcends” where she portrayed Marie Antoinette spoken in French. Wolff is a graduate of the American Musical and Dramatic Academy in New York City and the Northside School of Performing Arts in Atlanta.

Geoffrey DeBach (Nick) is a Pennsylvania native who recently found his love for acting while taking communication courses at Penn State University. DeBach is finishing his degree at the College of Charleston while continuing his acting. He was most recently seen in Art Forms and Theatre Concepts’ production of “Bubblin’ Brown Sugar” for the 2014 Moja Festival.

Lauren Harris (Honey) making her debut on the Charleston stage. Originally from Westchester, N.Y., Harris began performing at the age of 8, training for many years with the PlayGroup Theatre for Children and Young Adults, where she appeared in more than 20 productions. Some of her stage credits include “Merrily We Roll Along” (Gussy Carnegie), “Little Shop of Horrors” (Ronnette) and “Into The Woods” (Evil Stepmother). Harris has a bachelor’s degree in theatre studies from SUNY Purchase College.