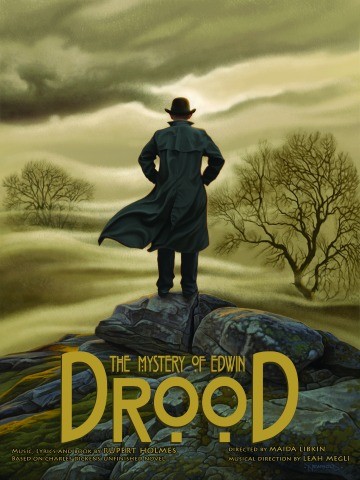 The Footlight Players is bringing “The Mystery of Edwin Drood” to the historic Footlight Players Theatre for its Charleston premiere. “The Mystery of Edwin Drood” was Charles Dickens’ final novel and was unfinished at the time of his death in 1870. Opening April 24 for the first time in Charleston, this musical performance engages the audience in creating the ending.

The story centers around Edwin Drood’s uncle, John Jasper, a choirmaster and opium addict. Jasper is in love with his student, Rosa Bud, also Drood’s fiancée. The lovely Miss Bud also has caught the eye of the hot-tempered Neville Landless. Drood and Landless are instant enemies until Drood disappears under mysterious circumstances.

The Footlight Players will draw in the audience members with mystery, melodrama and music. And the audience will fill the roles of author and playwright, deciding the ending of the show and few other plot twists as they watch the results of their decisions unfold on stage.

“The Mystery of Edwin Drood” is directed by Maida Libkin, a previous musical director for several productions with The Footlight Players. An accomplished director, pianist, conductor, vocal arranger, and educator with several international and Broadway credits, Libkin is on the faculty at Ashley Hall and was the music theatre artist-in-residence at the College of Charleston for a dozen years. She is artistic director of The Company Company.

“There are well over 500 possible endings for each performance,” Libkin said. “And our brilliant company of actors is prepared to do each and every one of them.”

Charleston native Sara Coy plays the part of Edwin Drood, calling the character a “walking contradiction and incredibly human, vacillating from being monstrously sincere and considerate one moment, to a brazen boor the next.”

Long-time local actor Paul Rivers takes on the part of John Jasper, noting that Jasper is a “a man lost in his obsession for Rosa Bud and his addiction for laudanum. He is completely mad but sane enough to know that he must keep his desires and addiction a secret from those who know him.”