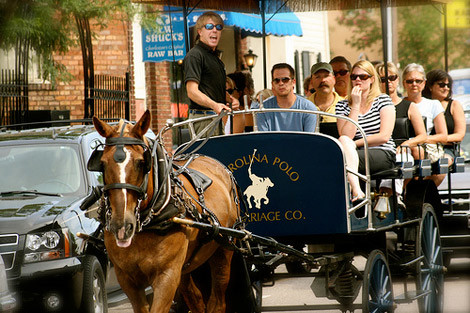 Image by Flickr user pocketwileyImage by 20080802carriage.jpg No comment from the equine working class on a recent decline in their industry.

People are still coming to the Holy City in droves, but the problem is that they're not visiting the attractions, and that has local businesses worried, The Post and Courier reports. Basically, the problem is that high gas prices and a rough economy are keeping people closer to home, and the newspaper says that many of the tourists coming to Charleston these days are nearly local themselves, so the usual attractions don't hold the same appeal. Maybe they've been here before, or maybe they are just tired of hearing about Fort Sumter.

Month-to-month traffic at museums, historic homes and other attractions has slumped by tens of thousands of people compared with last year, according to the Charleston Area Convention and Visitors Bureau.

One of the big decreases, the newspaper says, is in the carriage trade. Some drivers report business being about half of what it was last year at this time.

So what's the answer? Well, the Charleston Area Convention and Visitors Bureau and others have launched some creative efforts to attract more tourists, for one thing. The S.C. Aquarium is giving the "staycation" its due, and there's the Ultimate Wedding Giveaway, as well.

Back in January, Charleston City Paper ran an article about being a tourist in your own town, one of the great programs held each winter to keep the industry running in the offseason. But who says you can't do all of that in August, too?