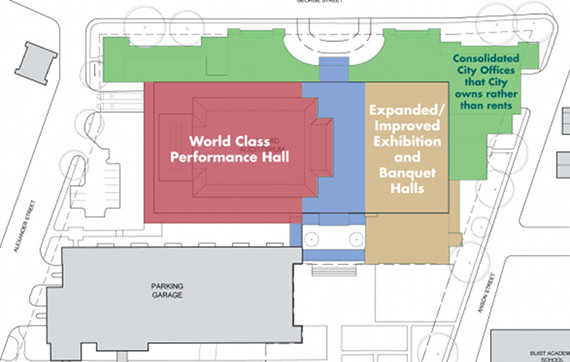 The Charleston Regional Business Journal has a fresh reporting on the Gaillard's renovations.

I forgot to stick this link in below, but to get a glimpse at the plans with images, diagrams and the like, check out the official Gaillard Center page.

This afternoon Mayor Joe Riley today laid out plans for a $142 million renovation of the Gaillard Auditorium - the city's most expensive building project to date.

The plan is to do a major overhaul and upgrade to the 1968 auditorium and exhibition space and turn it into a modern facility for the performing arts and improving the exhibit space.

Mayor Riley expects that the project, which could begin in two years, that private donations will cover half the cost, and the remaining $71 million would come from existing city revenue and borrowing.

Hop over to The Post and Courier for their in-depth piece on the renovations.

Built in 1968, the Gaillard Municipal Auditorium is at long last set for some much-needed sprucing up. And not just a little sprucing, we're talking about a $105 million facelift.

The Post and Courier has the story about this mainstay of not only Charleston's culture scene but numerous other community events.

There's still a lot of ifs and buts about this proposal, but the best hope seeks a 2011 start date.

And let's not forget that the venue is home to many Spoleto performances.

The Gaillard is at 77 Calhoun Street in downtown Charleston.