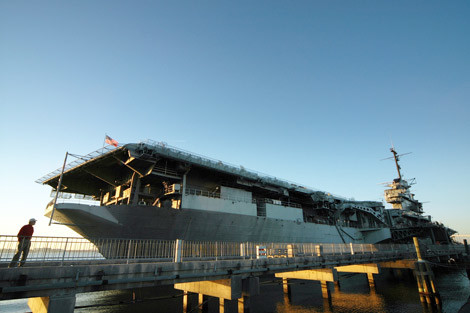 Image by flickr user Peter GeneImage by patriotspoint.jpg The aircraft carrier Yorktown is only a part of the Patriots Point Authority's millions of dollars worth of land and military history holdings.

Patriots Point has hired a new executive director, and he's from right here in the Lowcountry. Retired Brig. Gen. Hugh Tant III, a Mount Pleasant native, was chosen to replace David Burnette, a former Navy commander. Burnette resigned in October after a co-worker found lewd photos on his office computer.

"He has a passion for the themes represented by Patriots Point," Hagerty said. "And further, we think he is the kind of person who can deal in the real world of having to make business decisions that will allow us to accomplish our goals."

Tant, 58, said his primary goal will be to keep the history represented at Patriots Point "viable."

Apparently he's a champion shag dancer, as well, and was known as "The Dancing General," according to The Post and Courier.