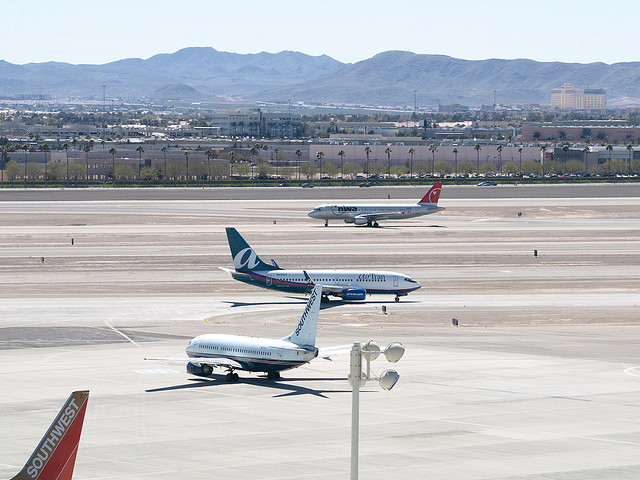 Update May 3: Yesterday Southwest announce a major if effectively transparent step: It has closed its purchase of fellow discount airliner AirTran.

While the two companies will very soon be effectively the same, for us fliers the deal will be largely transparent with two separate plane fleets and a need for us to interact with the two "branches" separately until at least sometime in early 2012.

For all the details you can handle, check out the press release.

Since our first report on this way back in September (see below) Southwest has begun flying in the Charleston market — for details on why this merger is a very good thing for flights in and out of the Holy City, keep reading below.

Southwest, which flies to the same number of cities as AirTran but is some four times larger and offers about four times as many non-stop routes, will be able to use AirTran's network to expand to many East Coast cities and make a bid to compete with Delta through access at Atlanta major airport hub.

The company also says the acquisition will allow it to serve "many smaller domestic cities that we don't serve today, and provides access to key near-international leisure markets in the Caribbean and Mexico."

For the business rundown on what's up, check out this report at Businessweek.

The subtext of all this is great news for fliers in Charleston where Southwest is due to expand to in 2011. It likely means we'll have a competitive low-cost airline in Charleston that serves most of the destinations served by the bigger companies.

The deal will also open routes of interest to a number of regional cities of note not currently served by Southwest: Charlotte, Asheville, and Richmond.

For more background on the Southwest move to Charleston check out our topic page.

If you're a gluten for info, check out the press release below:

ORLANDO, Sept. 27 /PRNewswire-FirstCall/ -- AirTran Holdings, Inc. (NYSE: AAI), the parent company of AirTran Airways, announced today that it has entered into a definitive merger agreement to be acquired by Southwest Airlines (NYSE: LUV) in a transaction currently valued at more than $1.37 billion. Including existing AirTran Holdings, Inc., indebtedness and capitalized aircraft operating leases, the aggregate transaction value is approximately $3.42 billion.    Under the terms of the agreement, shareholders of AirTran Holdings, Inc., will receive a combination of Southwest common stock and cash valued between $7.25 and $7.75, depending upon the average trading price of Southwest stock for a 20 trading day period to and including three trading days prior to the closing of the merger.  At least $3.75 of the merger consideration will be in cash.  The stock portion of the consideration will be 0.321 shares of Southwest common stock for each share of AirTran common stock, unless the trading price of Southwest common stock would cause the overall merger consideration to exceed $7.75 per share (in which case the number of Southwest shares will be decreased so that the consideration equals $7.75 per AirTran share) or would cause the overall merger consideration to be less than $7.25 per share (in which case additional cash, Southwest shares or a combination of the two will be added so that the consideration equals $7.25 per share).

The acquisition of AirTran Airways by Southwest Airlines will bring together two great companies and create one even stronger low-cost carrier. The two airlines currently serve 106 communities from coast-to-coast, Mexico and the Caribbean, with 685 all-Boeing aircraft and nearly 43,000 dedicated, fun-loving Employees.

"This agreement is great news for our Crew Members, our shareholders, our customers and the communities we serve. Joining Southwest Airlines will give us opportunities to grow, both professionally as individuals and as a group, in ways that simply would not be possible without this agreement," said Bob Fornaro, AirTran Airways' chairman, president and chief executive officer. "This agreement with Southwest is a testament to the success and hard work of the more than 8,000 AirTran Crew Members who have built this airline. I am tremendously proud of the things we have accomplished together and look forward to continuing that great work during this next exciting chapter of our history."

The combined airline will benefit from greater economies of scale and the integration of operations will be aided by significant fleet commonality. The result is an airline that is better prepared to meet the challenges of an increasingly competitive airline environment and take advantage of strategic opportunities better than ever before.

"Both companies have dedicated people with kindred Warrior Spirits, who care about each other, and who care about serving Customers. We will continue to enhance our award-winning Customer experiences and high-quality operations," said Gary Kelly, Southwest Airlines' chairman, president, and chief executive officer. "We believe this deal can benefit all Stakeholders through an expansion of low fares for Customers, opportunities for Employees of both companies and for suppliers and vendors, and favorable returns for Shareholders. Ultimately, we want to spread low fares farther and look forward to working together with AirTran's Crew Members to realize the new opportunities we expect to achieve from this deal."

The AirTran Board of Directors, on the unanimous recommendation of a Special Committee of independent directors, approved the merger agreement and recommends that AirTran Holdings, Inc., shareholders approve the transaction.

Completion of the transaction, which will require both regulatory and shareholder approvals, is expected to close by the first half of 2011. Commercial and operating integration is slated to culminate in 2012, with both carriers operating under Southwest Airlines' Federal Aviation Administration operating certificate in Dallas.

Until the acquisition is approved and finalized, both carriers will continue to operate independently. For more information, please visit: www.lowfaresfarther.com.

AirTran Airways is a Fortune 1000 company and has been ranked the number one low cost carrier in the Airline Quality Rating study for the past three years.  AirTran Airways is the only major airline with Gogo Inflight Internet on every flight and offers coast-to-coast service on North America's newest all-Boeing fleet. Our low-cost, high-quality product also includes assigned seating, Business Class and complimentary XM Satellite Radio on every flight. To book a flight, visit www.airtran.com.

After nearly 40 years of service, Southwest Airlines (NYSE: LUV) continues to differentiate itself from other low fare carriers--offering a reliable product with exemplary Customer Service. Southwest Airlines is the nation's largest carrier in terms of originating domestic passengers boarded, now serving 69 cities in 35 states. Southwest also is one of the most honored airlines in the world known for its commitment to the triple bottom line of Performance, People, and Planet. To read more about how Southwest is doing its part to be a good citizen, visit southwest.com/cares to read the Southwest Airlines One Report(TM). Based in Dallas, Southwest currently operates more than 3,200 flights a day and has nearly 35,000 Employees systemwide.