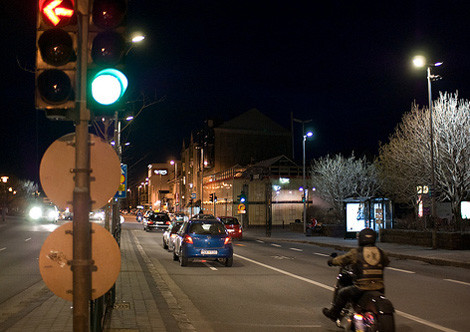 Image by flickr user Karl GunnarssonImage by 2419325481_9af26693e3.jpg Some argue that not only do two-wheeled vehicles have a hard time triggering traffic lights, but that waiting for them to be triggered also can increase traffic congestion.

Update: Governor Sanford has signed the bill, making it law.

Here's the new bit that relates to motorcycles and bicycles:
(5) Notwithstanding any other provision of law, if a driver of a motorcycle or moped, or a bicycle rider, approaches an intersection that is controlled by a traffic-control device, the driver may proceed through the intersection on a steady red light only if the driver or rider, as the case may be:

(a) comes to a full and complete stop at the intersection for one hundred twenty seconds; and

(b) exercises due care as provided by law, otherwise treats the traffic-control device as a stop sign, and determines it is safe to proceed.

Original post: A new bill sent to Gov. Sanford would join South Carolina with six other states that allow motorcyclists to go through a red light after waiting for two minutes. The bill also targets motor scooter drivers and bicyclists.

The logic is that these vehicles are often too small to properly trigger sensors at some red lights. This not only is a nuisance to operators of these smaller vehicles but can cause traffic to back up.

This isn't the first time a bill like this has been considered in our state. A bill with a similar provision did not make it in 2006. That one required waiting 60 seconds before proceeding.

Arkansas, Idaho, Minnesota, Tennessee and Wisconsin all have similar laws. A representative from the American Motorcyclist Association said none of the states has seen a rise in fatalities because of their red-light laws. Tennessee is the only one of the states that requires use of a helmet.

In 2004, there were 88 deaths on motorcycles in South Carolina. In 2006, that number rose to 109, according to the National Highway Transportation Safety Administration. Eight riders died in Charleston County in both 2004 and 2006. In November, the agency announced a new effort to reduce motorcycle fatalities.

The bill hasn't been signed by the Governor's Office yet and a spokesman indicated that the governor is going to do some thinking before signing it, particularly on the law enforcement side.