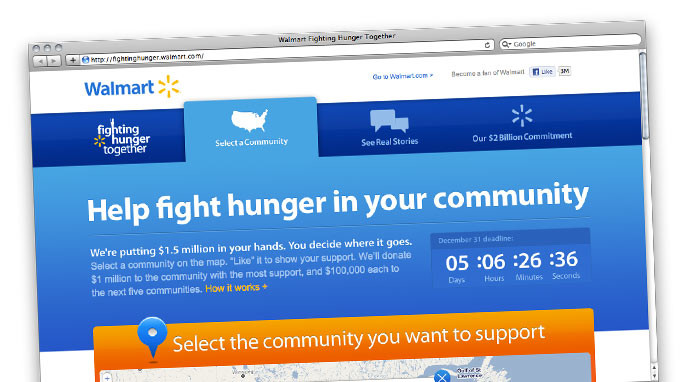 Update February 24: Officials announced in a press conference this morning that the $100,000 grant will go to the Lowcountry Food Bank and Trident United Way.

For more on how the money is going to be spent, hop over to the article in The Post and Courier.

Charleston has officially placed number 5 and will be getting a $100,000 grant, as will Columbia which finished number 3.

Update December 31, winner: It looks like South Carolina will be taking $200,000 home to feed the hungry.

As of vote closing at 7 p.m. Charleston was at number five, and Columbia at three. Both spots would bring $100,000 awards. The number one spot goes Salt Lake City who is slated to get $1 million.

The official results will be announced on January 5.

Live 5 News has posted a video overview of the whole saga thus here; watch it here.

Update December 30, doing better: And like just like *that*, the supporter count has more than tripled to  67,000.

Still despite that bringing us to the qualifying #6 spot with a lead of 30,000, our own explosive growth shows how easily it could slip away.

Update December 29, you can do better: Earlier this morning Charleston had slipped down several spots but a surge has regained position 8 — but that's still two too low for any cash.

Currently it's held by Grand Rapids in Michigan. Columbia has moved up to #3 with 160,000 supporters.

You can do better Charleston. Cast your support here.

Update December 27, moving up: With four days left, Columbia is holding steady at number 4, but Charleston is picking up the pace.

First reporting: As part of their Fighting Hunger Together initiative, Walmart and the Walmart Foundation are putting on a $1.5 million Facebook contest to get food to some of the nation's most hungry cities.

Walmart will donate $1 million to the community with the most "likes" on Facebook, and $100,000 each to the next five communities.

What's it mean? Columbia is pretty likely to remain in the top six before the voting ends in 5 days, but Charleston has a long ways to go.

Voting closes on December 31 with the winning community and the five runner-ups to be announced on January 5.