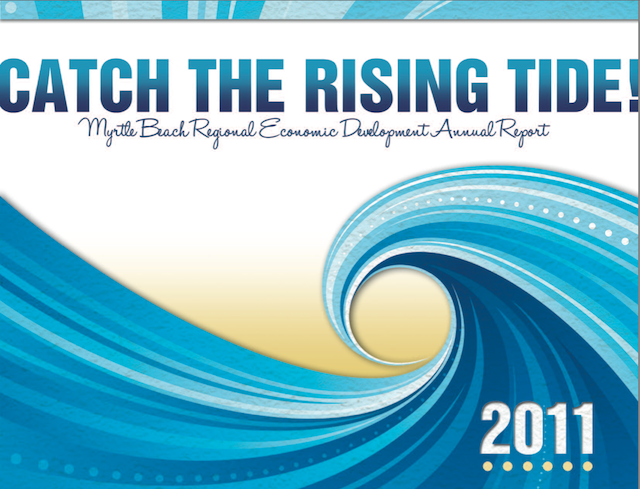 Adva Saldinger﻿ also takes a look at the existing call center activity we have in the Myrtle Beach area. See the full write-up here.

First Report: Today the Myrtle Beach Regional Economic Development Corporation held their general membership meeting. While it wasn't quite as energetic as the last meeting, it was definitely well attended and packed with information.

Once the introductions and some formal procedures were out of the way, the treasurer's report showed a healthy balance sheet. MBREDC Chairman Doug Wendel made it a point later in the presentations to mention that all of the public funding provided is managed completely separately from the revenue generated from memberships. "We have clearly isolated those government issued appropriations so there is no confusion about our expenditures," Wendel stated.

Horry County Council Chairman Tom Rice requested some time to address the membership. He gave great praise to Doug Wendel, Brad Lofton, and the rest of the MBREDC team. "We've kind of played around with economic development in the past," Rice said, "but now Doug and his team are putting a serious effort into this." Rice also briefly addressed the recent events with the AvCraft deal and said that it was just a good example of how progress is being made in establishing a dialog and figuring these things out.

The committee reports followed and here's some highlights:

The keynote speaker, Jonathan Sangster, is a Senior Managing Director with CBRE Consulting. His presentation was information heavy and honest about the Myrtle Beach area's assets and liabilities from the eyes of a prospect company. He gave great insight about how the site selection process works and how Myrtle Beach Regional Economic Development should present itself to prospect companies.