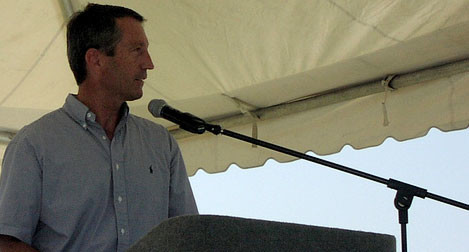 Image by Flickr user linkerjpatrick Image by 20090518-sanford-2.jpg Sanford knows how to say "no" and he's really, really not afraid to say it ... hundreds of times.

Update May 19: Sanford has vetoed the budget's stimulus funds, and 47 other parts. Get the full update here.

Get ready to hear our governor's name a lot over the next weeks.

The Legislature has sent the anti-spending man a $5.7 billion (or $20.7 billion depending on how you're counting) budget that requires the use of stimulus cash that Sanford has repeatedly said no to.

So, it's entirely reasonable to expect hundreds (yes, hundreds) of vetoes in the budget and on other bills the Legislature sends in the final days of session. Then expect the Legislature to easily override those vetoes.

Ultimately, we'll likley land in a situation where Sanford says he won't release the stimulus money and the Legislature will order Sanford to do so: Next stop court.

Update May 19, morning: The Articles I had linked to are now dead. Here are a couple different ones that have sprung up in the meantime.

S.C. Statehouse Report has an excellent overview about what to expect during the veto process. -- The publication also says that hotly contested bills about a cigarette tax increase, an abortion waiting period, among others, are all but dead.

The State writes about how the budget debate has consumed Columbia and slowed progress on many other issues. And The Post and Courier gives an overview of what's left on the Legislature's bill-passing plate.

Also, The State has penned an editorial imploring Sanford to also veto outside of the budget's stimulus funds, saying there's tons of other wasteful spending in there.