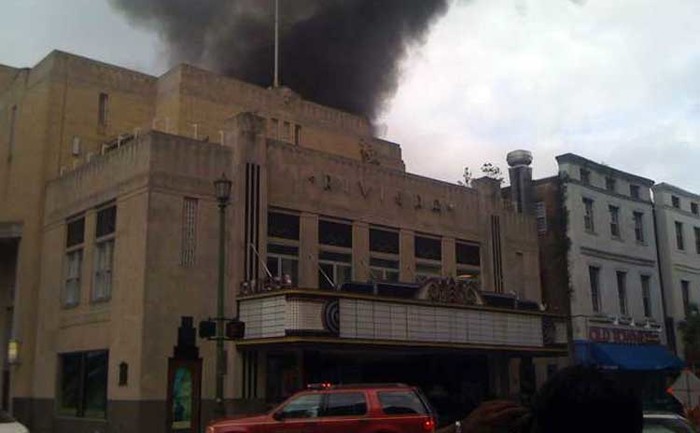 Image by Ken Hawkins/TheDigitelImage by 20090707-fire.jpg While the fire appeared to originate from the Riviera, it was actually from a small building behind the neighboring building.

Updates at the bottom.

A fire erupted just after 8 a.m. on Tuesday, July 7, in a building behind Old Towne Grill & Seafood at 229 King Street in downtown Charleston.

At first the smoke appeared to be coming from the historic Riviera Theater, but was coming a small cinderblock building (click for a detailed map).

As of 8:45 a.m. the scene was still active with many firefighters on King and Market streets, but most of the activity was being done by a handful of firefighters on the small structure.

Many downtown streets in the area remain closed and traffic is congested in much of the nearby areas.

Update July 7, 9:30 a.m.: The Post and Courier has details on where and how the fire started; go get them.

Update July 7, 10 a.m.: The Post and Courier has added a photo gallery, including this interesting one submitted by Jason Murbarger.

Update July 7, early afternoon: The Charleston Regional Business Journal has added a story that has additional details about the buildings and what led up to the fire; go take a read.