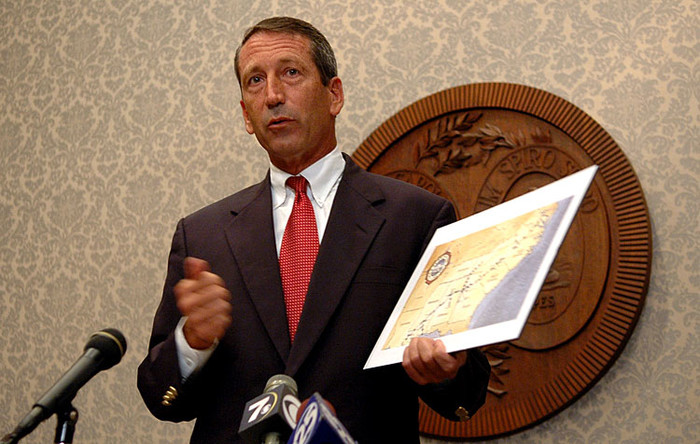 Our Governor, Mark Sanford, has had no shortage of detractors across the country (and on this site) for not taking the $700 million in stimulus funds to fund K-12 schools, colleges, and public safety -- all of which are facing sizable budget crunches.

Read more stories on this subject in our stimulus package topic page.So when I saw that the governor had penned a column about why his stance is what it is, I thought it best to simply serve it up so that we could all see both sides of the issue.

Though we are constitutionally guaranteed free speech, it is illegal to walk into a crowded movie theater and yell the word "fire" if there is not one. Unfortunately much has been suggested over the last few weeks -- as the Democratic National Committee ran ads and Sen. Hugh Leatherman (R-Florence) crafted a so-called Senate Finance "chaos" budget - meant to scare people into believing if my administration didn’t walk lockstep with the Obama administration in spending all the stimulus money as Washington thinks best I would indeed be courting disaster for South Carolinians.

I believe this is the wrong way to push for the spending they want and I understand many people are concerned -- and so I wanted to write to set a few things straight.

Although there is a great temptation to expand my rationale to include what I believe to be the disastrous long term consequences that come to our nation in spending money we don’t have -- and in issuing yet more debt to solve a problem that was created by too much debt -- I will stick with why I believe the Obama administration’s package doesn’t work for South Carolina as configured, and why I think it is so important to custom-fit stimulus efforts to the state in question.

A few facts first: Last year state government spent $19 billion, and this year we will spend $21 billion - an 11 percent increase without the stimulus money we have debated over the last few weeks. Even education spending will go from $3.3 to $3.5 billion, a four percent increase -- and do any of these numbers strike you as the sort of numbers that fit with chaos?

Common sense dictates that when you’re in a hole it’s vital you stop digging. Requiring our state to spend beyond its means for the next 24 months to be eligible for all the stimulus monies guarantees that South Carolina will dig itself a $740 million financial hole. Who helps us then? Do we raise taxes, and thereby weaken our competitiveness relative to other states and countries -- or do we just summarily end programs for some of the neediest of our state? Or are we to plan on yet another round of stimulus windfall from Washington in two years -- again, with money we don’t have? I don’t know the answer to these questions, but I do know the $740 million budget hole created would be the largest such hole in South Carolina state financial history.

Our grandparents’ notion of moderation in all things is especially important when one considers the financing of a state. More than $8 billion of total stimulus effort is projected to come to South Carolina, we proposed taking about 10 percent of this and applying it to paying down state debt. I don’t understand how that could be considered unreasonable or the kind of effort that would create disaster. This stimulus is more than our state budget spends in an entire year. If a family won a lottery that sent them a windfall larger than their paycheck for the year, the family that actually set something aside to pay down the mortgage or the credit cards would be viewed as prudent.

Why should it be any different for a state, particularly if as in South Carolina’s case we are fourth in the entire nation in the percentage of our budget that goes not to teachers or health care -- but debt repayment? Eleven percent of every dollar in yearly revenue goes to paying down debt, and we have $20 billion on top of that in unfunded long-term political commitments. Paying these monies down would give us greater financial latitude in twenty-four months when the federal gravy train ends to indeed offer more in the way of governmental services. In our case it would pay dividends in the first twenty-four months alone of $162 million that would be saved in debt service that could go to government service.

Finally, spending all this money relieves the political pressure to make reforms essential to South Carolina being more competitive in the global economy -- and in turn offering more employment and "stimulus" to the national economy. Political forces rarely embrace hard changes and they never embrace change when new money allows for the possibility of bypassing them. General Motors recently took billions with the promise of reform, but not surprisingly they didn’t make the changes vital to their competitiveness over the long run. The debilitating thing about federal money is the change it forestalls, and I think the same holds true when it comes to running a state.

The easiest of all things would be to take and simply spend all of Washington’s well-intended stimulus efforts -- but in our case it would guarantee opportunities lost that I don’t think our state can afford.

Editorial via way of The Palmetto Scoop.