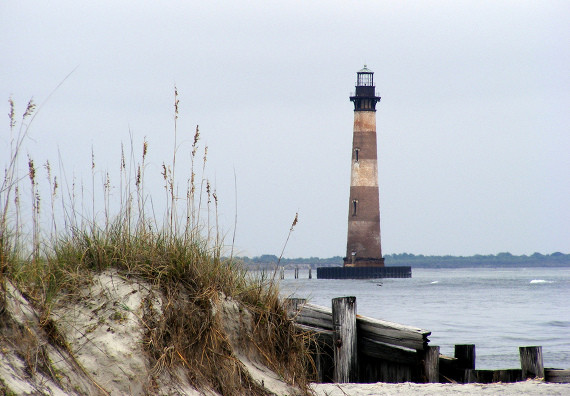 8:28 am on Wednesday January 2, 2013 | Posted by Amanda Click
Updates on the Morris Island Lighthouse repairs

Update January 2: The Post and Courier reports today on the $5 million worth of preservation efforts that have gone in to saving the Morris Island Lighthouse thus far.

Despite the completed work of fortifying the lighthouse's rotting foundation  the centuries-old cast iron, tower windows, lighthouse lantern glass and paint work still need some serious TLC. The conservation effort has been a slow, but come this spring, restoration efforts are likely to continue.

Hop over to the article in The Post and Courier for more.

First reporting: The effort continues to save the Morris Island Lighthouse as crews work upward of 13 hours a day installing concrete micropiles to keep the Folly Beach landmark from toppling over.

According to The Post and Courier, the 68 concrete micropiles, are being driven about 60 feet deep into the foundation in order to replace the old wooden pilings that have been eaten up by small saltwater clams known as "termites of the sea." The construction crew is also adding 30,000 tons of sand to the lighthouse's the cofferdam.

The finishing touches to the Morris Island Lighthouse scheduled to be wrapped up be September 1st include adding new technology to monitor underground movement, adding new dock, and conducting some minor cosmetic work.

The Post and Courier has a lengthy piece on all the hard work being done to restore the Lowcountry's iconic lighthouse. Hop on over and read all about it.