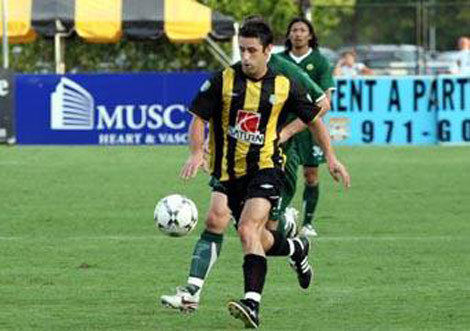 After their first loss in more than a month, the Battery ensured their grip on the first-place spot by besting the Portland Timbers, 2-0.

The Charleston Battery (9-4-3, 30 points) used their first-half goals to defeat the fifth-ranked Timbers (5-7-7, 22 points). The team rallied after their defeat last Saturday. A writeup from the team:
Armed with knowledge that their top-spot status was under threat, the Battery was looking at a chance to take advantage of a road-weary Portland team and reclaim first place.

The host's did get things rolling early, enjoying a genuine go-ahead chance in the opening seconds when Chris Williams fired in a pass across goal that eluded forward Randi Patterson. The Battery's leading scorer had another similar opportunity minutes later, but again couldn't connect with the low, driven cross.

Portland responded when forward Lawrence Olum, who scored for the Timbers on Friday night, headed off-target in the seventh minute. Then in the 24th minute Chris Brown's free kick was flicked wide by Cameron Knowles, and late in the half both Knowles and Shawn Higgins fired efforts just inches over the bar.

But like Portland the previous night, the Battery suffered a key injury early in the game when forward Lazo Alavanja fell awkwardly and had to be replaced by Spicer in the sixth minute.

The Battery pulled in 3,542 spectators, a 70 percent capacity crowd at Blackbaud stadium. Past game results are available on their Web site.

And don't forget the Battery play the Seattle Sounders on Aug. 12 in the US Open Cup semifinals in Charleston.