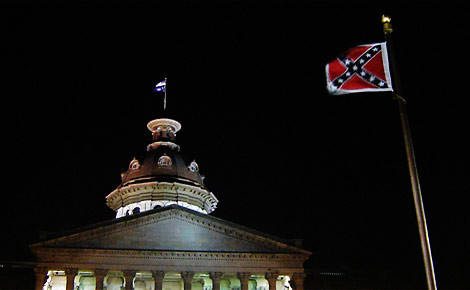 Image by flickr user DMBFreakNo41Image by 20080716flag.jpg The NAACP says the flag has got to go. Once again, the S.C. Sons of Confederate Veterans say heck no.

The NAACP is working overtime to get the Confederate flag removed from the Statehouse grounds. The group says it will continue to place pressure on the sporting and film industries to avoid South Carolina, while working on a plan to target tourism more aggressively.

Hayes told the Associated Press the organization is still working on its plan to discourage tourism and film production in the state.

The NAACP National Board of Directors passed a resolution earlier this year calling on the organization to address S.C. tourism “a little more aggressively,” Randolph said.

A compromise among state legislators was reached in 2000 to have the flag removed from the Statehouse dome and placed elsewhere on the grounds. But the NAACP won't accept anything short of complete removal of the flag.

From The Greenville News:

The flag fight culminated in 2000 when about 46,000 people rallied in Columbia on Martin Luther King Jr. Day -- a few months after the NAACP launched a tourism boycott of the state.

White and black legislators later struck a compromise that moved the battle flag from the Statehouse dome to a pole adjacent to the Confederate Soldier’s Monument on the grounds and near a busy intersection. The NAACP rejected the deal and has maintained its boycott.

Despite the NAACP's efforts, or promise of efforts, it doesn't sound like legislators are paying too much attention. According to both of the stories quoted above, legislators haven't taken any action on the issue, and they have no plans to. They say that the whole thing was resolved and done with in 2000.

Update: The S.C. Sons of Confederate Veterans don't seem to be as willing to take the boycott lying down. S.C. Politics Today reports that the group "to raise the Confederate battle flag on major thoroughfares throughout Columbia in response."

If that happens, you can expect more national media coverage. Which will likely strengthen the NAACP's hand.