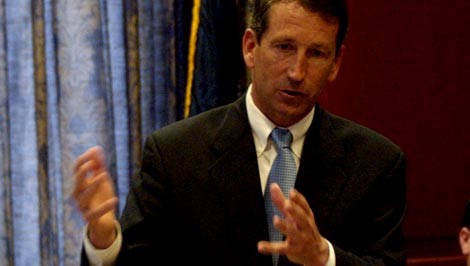 S.C. Gov. Mark Sanford's stance against federal bailouts has generally enhanced his standing among the Republican faithful, but his battle with the South Carolina Employment Security Commission may have been too bold.

If you missed it, Sanford threatened to withhold unemployment money unless the commission submitted to an audit. Here's a full synopsis, if you like.

Now politicians and papers from all over are denouncing the man's act.

And The New York Times puts the whole situation into perspective, in part:
Mr. Sanford, a wealthy real estate investor, is often mentioned as a potential Republican presidential candidate in 2012, in part because he is seen as an exemplary adherent of the party’s low-government, antispending philosophy. He recently wrote an op-ed article in The Wall Street Journal saying he was opposed to a “bailout” for states.

His stand on unemployment benefits was consistent with his contentious six-year tenure as governor and his philosophy, which is described as “basically libertarian” by William V. Moore, a political scientist at the College of Charleston. He has continuously sparred with members of his own party in the Legislature over spending, limiting his record of accomplishment.

So, if this whole battle over unemployment funding has felt a bit shallow to you, it's because there's a lot more going on, and The Times' piece is a great initiation. Go read it.