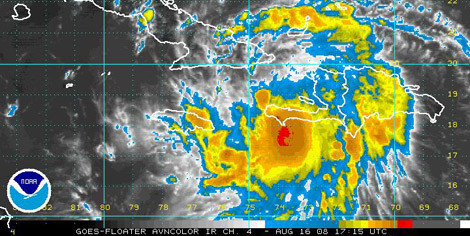 Image by National Hurricane CenterImage by 20080816fayb.jpg An infrared satellite image shows Tropical Storm Fay off the coast of Haiti and headed toward Cuba.

Tropical Storm Fay has formed in the Caribbean and is expected to become a hurricane in the next few days. While it doesn't look like it will turn north sharply enough to hit us directly, its current track suggests that there will be some rain coming our way.

The storm's track remains indefinite because of its slow movement and interaction with mountainous terrain in Hispaniola, but it is expected to move west toward Cuba before turning north, said hurricane specialist Daniel Brown of the National Hurricane Center.

The NHC five-day tracking cone shows the storm scraping along the western coast of Florida, and then coming up on the panhandle. By Thursday, it will be over Georgia, and probably bringing some fairly significant wetness here to the Lowcountry.

But, then again, you never can tell with these things ...