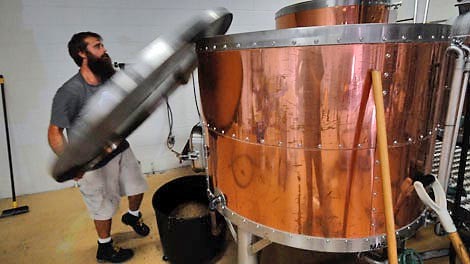 2:26 am on Friday September 19, 2008 | Posted by
Pair aims to give Charleston the high-quality beer it needs

Image by Geoff Marshall/TheDigitelImage by 20080919beer.jpg Dave Merritt toils away at the Coast Brewing Company.

Dave Merritt knows a good beer, and knew Charleston needed more of it. So he did something about it.

Dave, 31 and Charleston native, began home brewing in 1996 and understands the satisfaction of discovering one’s own brew preference. Continually dissatisfied with his various professions, a consistent aspect of his life has always been his passion for beer. After two failed attempts, he and his wife finally pursued their dream and established the Coast Brewing Company in 2007.

The family mantre: "We believe in utilizing alternative means to brew unique beer. We also believe in choice organic and local ingredients. From our biodiesel fired kettles to our energy efficient process, we forge hand crafted batches on our 7 bbl brewhouse."

Their draft beer drips from nine restaurant taps in downtown Charleston and fifteen in the metro area (get a list of where). Concocted with mostly organic and local ingredients, the Coast Brewing Co. offers an assortment of beers some brewed year round and some brewed seasonally.

Here are some of the varieties:

HopArt IPA: “Walking a fine line of sweet malt and assertive hop character. A hop presence so enticing it truly is a work of art. (7.7% abv). Brewed year-round.”

32/50 Kolsch: “Our take on a kolsch style ale that is soft on the palate with a delicate malt flavor. Balanced with a touch of wheat and honey notes . Dry and wine like with a flowery hop finish. (4.8% abv) Brewed Year Round.”
Rye Knot Brown Ale: “A full bodied dark brown ale. Intense malt character with a slight caramel sweetness. The chocolate and rye malts add to the rich roasted coffee notes. (6.2% abv) Seasonal-fall.”

Charleston's Most Unique also did a video with Coast Brewing, and they walk you through some of Coast's tasty concoctions.

On Tuesdays and Saturdays they open a section of the brewhouse dedicated to their “home-brew” store. And keep up on what's going on with their blog.

Now that you know all about the brewery and the beer they make -- you do realize it's Friday?