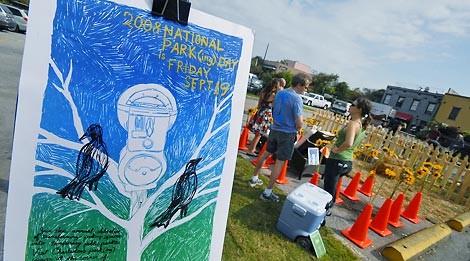 Cozily situated amongst parked tourists’ minivans, National Park(ing) Day in Charleston was a success after drawing the attention of visitors with their creatively-compact petting zoo, ping pong park, and “green car.”

Head over to our Flickr account for more pictures of the day's event.The parks were made with donated and loaned resources and, invited pointing fingers and gasping mouths. The ping pong park and the green car were donated by Design Works, whose unique method of being green -- an old Volvo filled with a plethora of plants -- lured in the curious crowd.

Established in San Francisco in 2005, National Park(ing) Day was established to celebrate parks and promote the need for more urban parks.

We're telling people to come into our parks and sit in our parks and be a part of them, as it's for everybody - this is all of our space, and we think it should be used for green space rather than for parking

If you’re itching to participate in next year’s events please check out the Trust for Public Land, which is a national non-profit land conservation group.

The Post and Courier also checked out the event but focused more on the stalemate between the city and downtown residents, in a nutshell: The city is all for reducing the number of parking spots, but folks get irate at the thought of parking and walking.

Update September 22: And occasional TheDigitel correspondent has posted this time lapse of the event to Facebook.