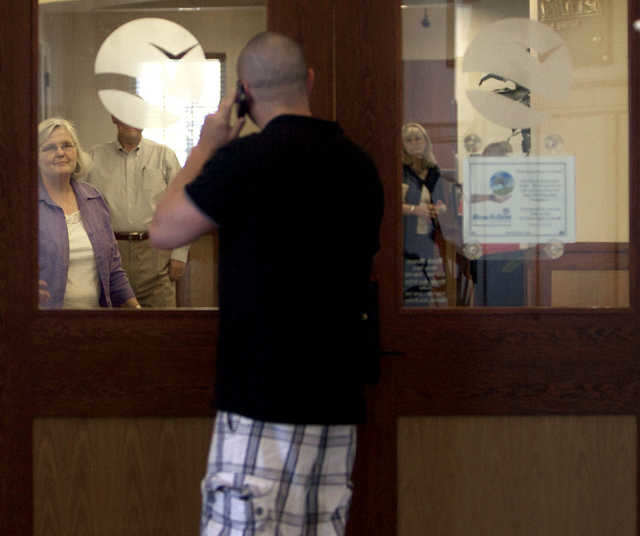 At exactly 5 p.m. Friday, April 9, 2010, the doors to Beach First Bank are locked with a customer jiggling the door knob off Grissom Parkway and 38th Avenue North in Myrtle Beach. About 60 people from the FDIC took control of Beach First. The FDIC is the receiver of the seven Beach First branches. The Sun News File photo.

An Horry County jury will decide this week if Beach First National Bank had committed fraud when it provided its former chairman with loan of a $3 million, so he could develop a residential neighborhood near North Myrtle Beach or if the former chairman should lose the property to foreclosure.

State Sen. Ray Cleary, R of Murrells Inlet, is accusing failed Beach First of using a fraudulent appraisal to convince him as well as his Waterfall Investors 2 LLC to take a loan in 2007 to help him buy 160 acres off S.C. 90 near the end of the Robert Edge Parkway.

Cleary – who was chairman of the bank’s board of directors and was one of the bank’s largest shareholders at the time of the alleged fraud  says that Beach First knowingly overvalued the property and also misled him about how many acres were undevelopable wetlands in an appraisal the bank conducted for the loan.

Bank of North Carolina, which took over Beach First’s assets when the bank was shut down in 2010  by the Federal Deposit Insurance Corp, says that the appraisal is a moot point because Waterfall applied for the loan even before the appraisal was ever completed. Cleary,  who is a Surfside Beach dentist, provided a personal guaranty for the loan.

The bank says that Cleary had never obtained his own appraisal on the property and that Cleary admits in court documents that he “knew little about the value of the property” when he applied for the loan.

According to court documents Cleary “knew that it [the property] was near the end of a proposed highway project and thus thought that the property would be valuable,”