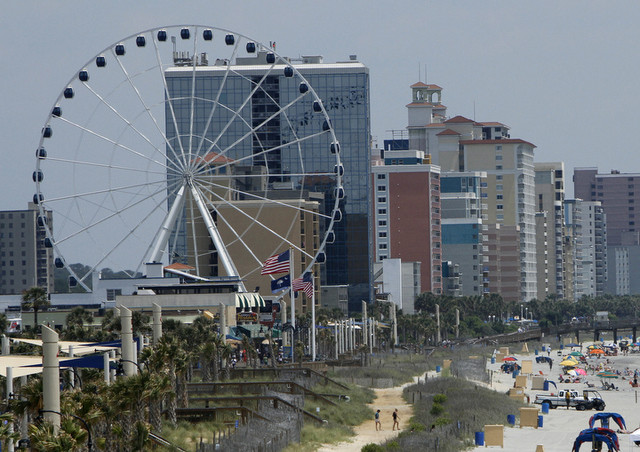 Over the next three years, Myrtle Beach will spend more than $20 million on improvements to Ocean Boulevard from Second to Ninth Avenue North, according to proposed budget presented to City Council on Thursday. STEVE JESSMORE — The Sun News

Soon a 22 story, 230 unit timeshare hotel tower could take the place of two Beach Villa apartment towers seen on the Myrtle Beach oceanfront. Crystal Blue Investment Group is currently working to bring a proposed Hilton Grand Vacations Club to the stretch of beach between the Schooner II Beach and Racquet Club and the Boardwalk Hotel both of which are located on North Ocean Boulevard and the project is estimated to cost $41.5 million, according to plans submitted to the city.

Officials with Hilton Hotels & Resorts did not immediately return a request for comment on Tuesday.

Representatives with Crystal Blue told the city that they hope to begin demolition on the existing towers located at 2200 and 2202 N. Ocean Blvd. on Aug. 1, and then begin construction on Sept. 1.

The timeshare is the third new lodging establishment that is proposed for Myrtle Beach area this year, after no new hotels have been built in the city since 2009, when construction stopped during the Great Recession.

“It’s not the construction boom we saw in the mid 2000s, but it may be a trend in the making,” says city spokesman Mark Kruea and he goes on further to say “It seems confidence in the economy has returned and we’re seeing the benefits of the tourism advertising that community has done.”

Head over to the Sun News to read the entire story