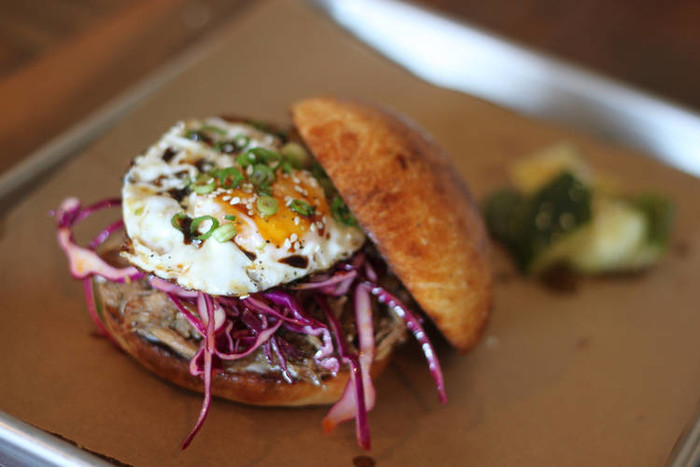 Charleston's food scene is ever evolving.

It also seems that the Holy City rarely looses a great place to eat, but only adding — so to help you navigate the latest and greatest, here's a list of a dozen or so places that have opened in the last few years (or are coming soon) that you really ought to have tried.

These ones don't stick to a single geographic spot, but are well worth tracking down.

Charleston's food truck scene is getting better and better. Image: King_of_GamesGuerrilla Cuisine﻿: Charleston's "underground" supper club. Generally you'll drop around $60 or more for some well done taste-tripping prepared by some of Charleston's best and brightest, at a location announced just a day or two before the event. Half the trick is keeping up with when and where, I generally follow the group's Eventbrite listings.

Food trucks: The trend of creative mobile food has been with Charleston for a couple years now with a dozen or so trucks offering up styles from Indian, to creole, to BBQ, to vegan doughnuts — it's generally well worth parking the car when you spot an unfamiliar truck. And be sure to keep an ear open for the periodic Food Truck Rodeos. I recommend keeping tabs on our food truck topic page.

Charleston has undergone a mini brew revolution since high gravity beer was legalized in the mid 2000s — sure beer is no proper dining experience, but I'll often make a meal out of some tasty hops.

Charleston Beer Exchange. Image: Chrys RynearsonBrewvivial: Held every February for three years now, so it's already passed for this year. I'd wager this is the best beer fest in the Southeast or perhaps beyond.

ChsBeer.org: Some local beer fans got serious and will keep you in the loop on local suds action.

The Craftsmen: Just announced spot to sport 38 taps (and a special IPA-only bar) along with many house made items in downtown Charleston. No official online presence yet.

Farmers market: The City of Charleston Farmers Market reopened on April 7 and, as usual, brings more than a few tasty options — if you haven't been down on a Saturday yet this year, it's time.

The rebirth of Sushi Hiro: This Japanese spot on middle King Street was always a solid option that rarely wowed or failed, but it closed its doors earlier this month to team up with local restaurant mavericks from REV Foods to reopen "soon" as Izakaya Hiro﻿. Watch for it.

Cannonborough Beverage Company﻿﻿: Old-school sodas. For now, find them at the Farmers Market.

Roots Ice Cream: Ice cream made with simple delicate flavors and sold from a roaming stand — track them on Facebook or look for them at the farmers market.

The bar at Husk: Husk is more than solid and well worth eating at, but personally I say make your dollar stretch: Check out the impressive South-sourced bar line-up and have an appetizer, then keep working the night.

Ted's Butcherblock: Good meats, good deli food, eat it there or to go, or stick around for one of their dinner events — regardless be sure to get some of their vacuum sealed house made beef jerky.

Part of downtown but this section of town has its own distinctive style. With (somewhat) cheaper rents you can often find more edgy food concepts, particularly the further you stray from King Street towards Cannon Street.

Closed for Business: Charleston's most confusingly named place has one of the city's most impressive arrays of taps, knowledgable beer staff, proper glassware, oh, and decent food, too (I recommend the pork slap and a tasty IPA).

The Macintosh: With the folks from Oak Steakhouse and O-ku behind this spot, and some solid food chops, this newcomer is fast becoming another Charleston mainstay.

The Cocktail Club: Located above The Macintosh (and owned by the same group) pair a solid cocktail before or after dinner.

The Recovery Room: This section of the list has been slowly meandering it's way up King Street, so end the night at this "tavern" with ties to Charleston's legendary Moe's Crosstown, and go easy on yourself with a PBR, after all the Recovery Room is the number two seller of the stuff in the U.S.

Glazed: "Real" doughnuts with traditional and funky flavors that change by the day, like PB&J, Maple Bacon, Orange Pistachio. You'll be able to find the perfect thing for your hangover.

Sesame Burgers & Beer﻿: It's the local burger spot's third location with its most impressive spot, food style, and brew lineup yet.

Coast also is a force behind the Brewvival. Coast Brewing: This is my favorite Charleston craft brewer and they give tours and do tastings twice a week (Saturdays 11 a.m. to 2 p.m. and Thursdays from 4 to 7 p.m.) You're also likely to find a food truck serving up fresh vegan doughnuts on hand. You'll also be a stone's throw from Park Circle's Montague Avenue.

Park Circle's Montague Avenue﻿: The mini-downtown inside sprawling North Charleston has some of the best eating and classic spots from the the Madra Rua Irish pub﻿, to fantastic locally sourced pizza slinger EVO, Cork bistro, and The Barbeque Joint.

Raul's Taqueria & Mexican Grill﻿: This relative newcomer to Charleston's oft-lacking Mexican cuisine scene seems to be taking the "authentic" title, sporting a 92% score with 50 reviews on Urbanspoon and the word "authentic" showing often.

The Big Nasty at Hominy Grill.This list is far from a complete list of all of Charleston's best eating, but it pretty well captures those that are newer — though we've probably left out a few. We welcome your nasty e-mails encouraging us to add more spots (ken.hawkins [at] thedigitel.com), or kind comments below to nudge us.

Oh, and a final word about getting in a Lowcountry staple: Be sure to swing by Hominy Grill for the Big Nasty chicken biscuit if you never have, it's fantastic.